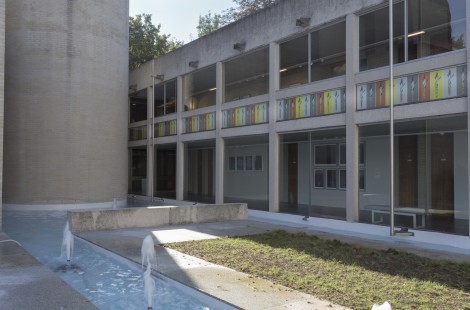 Gina Glover is one of two artists whose work is in the current New Hall Art Collection Exhibition: Reproductivities. The last 50 years has seen a revolution in ways/methods of plant and human reproduction. Each artist has created a personal interpretation of these dramatic changes.

Gina Glover trained at the Chelsea College of Art and received a second degree from the University of Westminster. She found her metier as a photographer, and uses colour, pigment and complex digital techniques to create her work.

Since the mid-90s Glover’s art residencies have been in hospitals. In 2008, Professor Peter Braude, Head of the Women's Health Department in King’s College London, invited Glover to provide works for the new assisted conception unit in Guy’s Hospital Tower. This assignment sparked a realisation of how ‘visual’ science can be.

Photography gives Glover a way metaphoric way to communicate complex technical processes to those undergoing IVF for whom the outcome is important yet highly uncertain. Inspired by Vincent van Gogh, who painted a branch of apple blossom to celebrate the birth of his nephew, she uses nature to depict the process of cell division. Her images greet you as you enter the genetic department and the IVF clinic in Guy’s Hospital.

Glover‘s interactions with staff members in the Guy’s Hospital unit gave her insight into the ethical challenges of IVF treatment and the personal resources, from religion to family, which they use to guide their decisions. This resulted in two artworks – Love-in-the-mist and Lunaria-Honesty. She presents staff responses in the image of an Honesty plant, reflecting the delicacy of the ethical context through artwork that is appropriate, light and approachable

Following her work in Guy’s Hospital, Glover worked alongside Dr Lucy De Wiel from the Reproductive Sociology Research Group (ReproSoc) on Life in Glass, at the invitation of Professor Sarah Franklin, Chair of Sociology at Cambridge University and Director of  ReproSoc.  In the process, she was introduced to Bourn Hall where researchers Patrick Steptoe and Robert Edwards successfully developed the IVF technique with the birth of the first ‘test-tube baby’, Louise Brown, in 1978. She had the opportunity to explore the laboratories, to delve through the archives, to look at the work created by those scientists and to represent it in art.

Professor Sarah Franklin approached Murray Edwards College with Life in Glass, resulting in the Reproductivities exhibition currently on show at the College until 30 November 2018.  Glover said, “I felt a tingle… this College set in beautiful grounds with a dynamic horticulturist, Jo Cobb as the Head Gardener, was a perfect theatre for me. At last my work would be in an iconic building within a community which embraces art and nature. I had already begun to translate the scientific images into blossoms and flowers, so it felt as though I had been given extra permission to work in this way.”

Four of the seven elements of Gina’s work in the Reproductivities Exhibition come from her Bourn Hall experience.

Instruments of Life: Glover discovered and photographed the original embryology laboratory equipment that had been used, among these a similar glass incubator that was used for Louise Brown. The Tungsten lighting of the lab produced an uninteresting result, but by inverting the images and altering their perspectival frames, Glover provided the viewer with a different perspective that better gestures towards their extraordinary scientific life giving properties.

The A.R.T. of Bob:  Robert Edwards regularly photographed the process of embryo development.  From his original slides, Glover selected those with his iconic hand markings on the mounts, notations for his presentations, which delighted her. Hence the light-hearted title, where A.R.T. is Assisted Reproduction Technology. Bob, the scientist, used photography to record facts and deepen understanding. Glover reinterprets them, displaying them in light boxes to bring out the wonder of the discovery.

Ex Ovo Omnia - everything comes from an egg: Set on 3 plinths, round glass domes magnify blossoms arranged in petri dishes to resemble overgrown fleshy cells, or intensifies digitally designed repeated text. They imitate the globular shape of a cellular orb and act as a mirror for the observer, inviting you to reflect on your own cellular origins.   You can do this sitting in a couple of college chairs supplied with velvet cushions, elegantly decorated with digital photographic images of frozen Hollyhock flowers from Glover’s garden.

Chemical Reproduction: Sir Robert Edwards (1925-2013) a biological scientist, and Nobel Laureate, was the leading pioneer in the development of IVF. Glover created vivid ‘blueprints’ of his original black and white photographs of cell division, including sperm meeting egg. She processed them with a proprietary solution, used at Bourn Hall to maintain the viability of embryos, mixed with a solution of ferric ammonium citrate and potassium ferricyanide which, when exposed to sunlight creates a cyan blue print – the original blueprints.

Glover’s other three artworks are related to maize. Having explored human fertilisation, the exhibition  looks at the reinvention of plant cultivation. They honour the work of American biologist Barbara McClintock who discovered transposition, or the ‘jumping gene’, for which she received the Nobel Prize in 1983.

Maize Collection: Glover created a screen of maize scanograms.  The maize cobs come from Sarah Franklin’s collection of maize which she started when a child, fascinated by its myriad variations and uses.

A-Maize-d: Images of maize, printed in yellow and orange on vinyl of window size, make a frieze of along the length of the Exhibition Gallery, which can be seen from the College’s main walkway.

Bloody Butcher’s maize: Jo Cobb, head gardener at Murray Edwards College, chose to grow this variety in the College garden, for its name, its height -it achieved 9 feet - and its strikingly colourful cobs. Glover photographed the plant and assembled the photos as a botanical illustration which was printed on vivid gold sateen fabric.