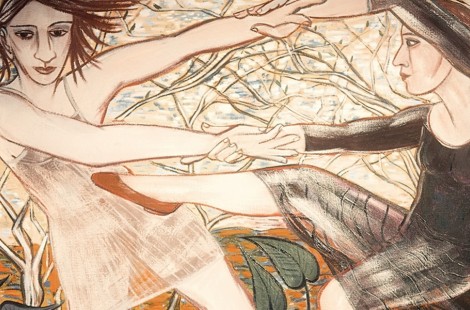 Eileen Cooper is an Honorary Fellow of Murray Edwards College.  She has generously donated two of her paintings to the New Hall Art Collection, firstly ‘Seasick’ 1992 oil on canvas, which she had painted in 1989 and more recently, ‘Perpetual Spring’, painted and donated in 2016.  These two works span her very successful and active career as an artist and art school lecturer.  They also mark the setting up of the New Hall Art Collection in 1986 and the 60th anniversary of the founding of New Hall, now Murray Edwards College.

Eileen Cooper studied at Goldsmith College and the Royal College of Art, graduating in 1977. During the 1980s she became a major figure well known and well regarded for her strong and passionate figuration.  She brings an unapologetically female perspective to her subject matter, which encompasses sexuality, motherhood, life and death. Her more recent work continues to explore feminism and female identity, characterised by uninhibited colours bursting with energy, contained by her expressive use of line.

Eileen has always taught part time alongside her studio practice, finding it stimulating and rewarding. Hence the appropriateness of her role as the first female Keeper of the Royal Academy (2010-2016) since it began in 1768, where Eileen had responsibility for the Royal Academy Schools, which run a 3 year, full time, postgraduate Fine Art Programme.

Though known essentially for painting, Eileen is also inspired by process and materials. She has created an extensive body of work in printmaking, and other works on paper in various media, as well as work in ceramics and bronze. Whilst Eileen has rarely drawn from life in recent years, a current project is a series of largescale drawings of her graduates from the Royal Academy Schools.

Eileen is very aware of the complexity of a woman’s life, a “balancing act” of work and family which makes developing ones practice a real challenge. Her view is that “We have to be our own champions”.  “Although, in my lifetime, women artist’s lives have changed , there is still a lack of visibility. Woman are still under represented in commercial galleries, museums and auction houses.”

She feels that the New Hall Art Collection could play a significant role in championing women artists. She sees it as a major resource with its extensive collection and believes it is now “far more on people’s radar “, seeing it referred to by people in the arts, cropping up with regularity on Instagram and on other social media.

Eileen would very much like to see the Collection being a focal point for the new generation of women artists coming out of the Art Schools, a place to commune, be inspired and a place to network. She believes it would be possible to replicate the energy which was generated at the founding of the Collection when artists donated their work.