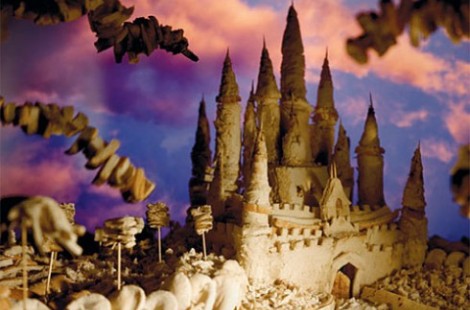 In 2016 Gayle Chong Kwan donated six large-scale photographic works from the series Cockaigne dating from 2004 to the New Hall Art Collection, one of the largest donations of photographs to date. The series is based on medieval ideas on the notion of a land of plenty, a place that served as a critique of the greed of the clergy as well as a place to be longed for in times of food scarcity. The work developed out of research Gayle undertook in Mauritius, the birthplace of her father. Gayle was interested in how the landscape was theatricalized for the tourist gaze, a sort of touristic consumption of the island.  Each photograph in the series depicts a fictional landscape made out of food that is based upon literary texts and the origin of the tourist industry.  Andonia is a landscape made of vegetables, whilst Voyage to the Centre of the Earth is made out of fish, and Babel is a tower that on close inspection reveals its made from sweating raw, cooked, and cured, meat.

Gayle works in what she describes as an ‘expanded and embodied approach to photography’, in installation, video, photography, and events or experiences, that range from large-scale public realm works to more intimate environments in which she uses found objects, left-over or discarded materials.

In early 2019 she was invited to create Wastescape: Weaving Landscapes of Politics, Dairy, and Waste for the Auckland Arts Festival in New Zealand. She explored the effects of the intensive dairy industry on water, land use, Co2 emissions and biodiversity.  Gayle worked with local community groups and schools to collect over 6,000 used plastic milk bottles which she developed into an otherworldly installation of waste, which literally grew out of the floors and ceilings of the enormous silos in Auckland Harbour. The interconnecting corridor between the silos was lined with a series of twelve photographic sculptural headdresses. The images in each were taken of rivers in New Zealand that are being polluted by the dairy industry. The work also references Maori weaving techniques and the granting of legal personhood to the Whanganui river as a means of protecting it.

Non-visual senses, immersive environments, and ritual experiences play an important role in Gayle’s work, and in  June 2018 Gayle created a work as an experiential research-led dinner for 100 people. At the Crossroads: Microclimate Sensory Banquet was held in the courtyard of the British Library. It was here that she had researched the politics of food production and transportation in relation to the area’s role as an interchange for food transportation across the UK and beyond and how individual and collective decisions around food are impacting on climate change.

Gayle has a BA Hons in Politics and Modern History from the University of Manchester, an MSc in Communications from Stirling University, and a BA Hons Fine Art from Central Saint Martin’s College of Art and Design, London. In 2015 she received an MPhil in Fine Art at the Royal College of Art, London, where she is also currently completing a PhD in Fine Art Practice.  She has just been awarded a year-long Research Fellowship in Photography at the V&A.

For Gayle, the New Hall Art Collection is a valuable asset with its significant collection of artworks made by women, and a valuable resource that she believes both artists and the wider public should be made aware and encouraged to see. Gayle’s generous donation to the Collection can be found, appropriately, in the Fellows Dining Room at Murray Edwards College, where the six works span the length of the room. The New Hall Collection hangs throughout the College and is open to the public.  The Porter’s Lodge has a self-guided tour that takes you around the Collection.