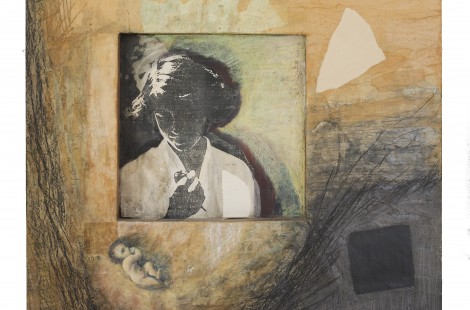 Mary Husted is a fine artist living and working in South Wales. She is a member of Butetown Artists, the Welsh Group and the Contemporary Arts Society for Wales. She has exhibited widely internationally and is also the initiating curator of the international touring exchange exhibition, OPEN BOOKS, a recent recipient of a Creative Wales Ambassador award.

"What the New Hall Art Collection means to me is something very personal. At its heart is a story.

I am an artist who came rather late in life to a full working practice. I had to abandon my early studies when I became pregnant at 17 and it was many years before I came back to it.

My story is one of a loss and a finding. When I had given birth to my first son in 1963, it was a serious social stigma to be illegitimate. Bending under the pressures put upon me, I gave him up for adoption. I was told to go away, live my life, forget it. Of course, this is not something one can do, but I tried. I married twice, had four more children and raised my family.

In the mid 1980s, as my children began leaving home, I started to examine that early experience. The loss of my first child weighed heavily on me throughout my adult life. In those few days I had shared with him, I had drawn him: a handful of small pencil drawings. In all the ensuing years, these drawings and a small photograph were all I had of him. I had not looked at them in many years, but when I did the memories came flooding in and I wrote about it.

A year later in 1986, I went back to college as a mature student to do a Fine Arts degree. As I became more confident in my work, I started to weave veiled hints of this experience into it, a process of ‘hiding and revealing’. It is a long and complicated process to bring a ’secret’ out into the open. I would say that in some ways all my work has been imbued with a sense of loss, most often in an abstract form, but one of my works in particular made more explicit reference, and this was Dreams, Oracles, Icons…, made in 1991.

When Ann Jones, then a curator at the Tate Gallery, was asked by New Hall to look for artists willing to donate work to the new collection of women’s art, she came to my house on one of her visits home to her family in Barry, Wales, where I live. Dreams, Oracles, Icons… was hanging in my hall. She stopped before it and suggested this could be a good piece for the New Hall Art Collection. My breath caught. This piece was, I felt, so terribly personal, revealing, confessional. Could I let it go? But then I pictured my work alongside work by many other women artists, in what would be the first British collection of women’s art. I also realised that as part of a public collection, it might make me visible to the one person this work was really about. In a way it was a flag in the world, saying ‘here I am’, if ever my ‘lost’ son wanted to find me. I had this fantasy of him standing in front of it, seeing my name, wondering.

I went on to establish myself as an artist, primarily in Wales, but also Australia where I worked for a few years. I became known for my three-dimensional wall-mounted boxes that explored relationships between different kinds of space and illusions. In fact, the first of New Hall’s temporary solo exhibitions was of my work, called Boxworks, in 1993. Over the next decade many group and solo exhibitions in various countries were added to my list. My work absorbed me, but I did not forget my son.

In early 2007 the law changed, allowing birth parents to match a birth certificate to a National Health Number, enabling them to trace a child given up for adoption. I had tried ten years earlier to trace my son, though without success, but in February 2007 I decided to try once again. I approached a charity dealing with adults affected by adoption, who agreed to help me in my search. The following September, I received an email telling me that my son was alive and living in the UK. Finally I knew that he was at least alive. I did not know if he would want to see me, but simply to know that he existed was a relief. Exactly a week later a message appeared in my Hotmail junk box, titled ‘Family Tree’. I almost deleted it but on impulse opened it. It read: ‘I am putting together a family tree and related family information with a friend of mine and we are looking for a Mary Vivienne Husted who may have lived in the Reading area of England in the 1960s. If this is not you then I would be grateful if you could let me know so that we can eliminate that possibility.’ I knew at once who it was: my son, looking for me. He too wanted the contact. My elation was unbounded.

Quite independently he had found me­ - through the New Hall Art Collection.  Having typed my name into his computer he had come up with some art websites. On the New Hall site, he found the work, Dreams, Oracles, Icons…, recognised that it was about him and emailed the address on the page. He had seen and recognised my flag. A flurry of emails followed, photographs and life stories were exchanged. A fortnight later we met. A whole golden October day we spent together in Kew Gardens, a day so out of the ordinary that it stands for me outside of time. We began there the process of getting to know each other.

The drawings I made of my son as an infant, together with photographs of him as a child growing up, photographs of him as a young man, and drawings of the man he now was, became the stimulus for a whole new body of work, which formed the substance of an exhibition, Hush Don’t Tell, in the New Hall Temporary Exhibition Space in 2010 - my second New Hall art exhibition. My son helped me mount it, and together he and I stood in front of the work, Dreams, Oracles, Icons…, placed in its corridor overlooking the fountains.

The New Hall Art Collection is an integral part of our shared story."