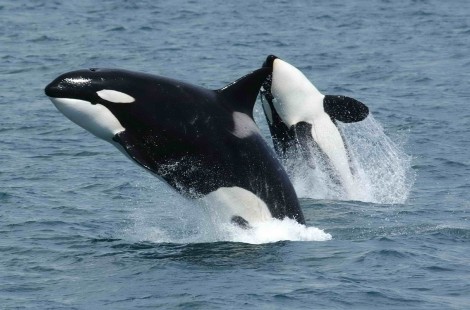 For centuries it was thought that humans were the only organisms in nature to go through the biological oddity of the menopause. Only recently have we discovered that we are not alone. Surprisingly, the menopause doesn’t appear in our close relative, the chimpanzee, but rather, present in a more distant species- the orcas. This begs the question; how did the menopause come to be?

I recently read an article by The National Geographic [1], investigating why female orcas have such a long life span for an organism of their calibre. It delves into research of an Orca population in the Pacific Northwest in 2019. The exploration, led by the University of York, found that an orca’s rate of survival is dramatically increased with the presence of a grandmother. The research discovered that orca females are no longer able to reproduce from the age of 40, yet continue to live until 90 (whereas males, live to approximately 50, and reproduce their whole life). Surely natural selection would aim to prioritise a mother’s ability to produce a maximum number of surviving offspring as possible? And ceasing to reproduce past 40 would interfere with this?

The reason for this lies with the orca mothers- their society is matriarchal. The backbone of their hierarchy is constructed on the role of maternal figures; they carry crucial expertise on food and resources, which fundamentally determine the survival or starvation of their kin. A second, and perhaps more prudent conclusion, is that the menopause inhibits mothers from competing with each other for scarce resources to feed their young. Having overwhelming numbers of offspring wouldn’t be practical - the likelihood that they will survive until adulthood is decreased due to the limited resources available. There also comes great risk with giving birth at old age; great strain is put on the mother’s body while also being vulnerable to predators. The possible complications would not only put the mother in danger, but her existing offspring too (so would be better to just avoid these obstacles all together). Through the University of York’s recent research, the menopause is more clearly explained as an effective method of maintaining mothers’ physical health, and serves an important social function of preventing competition between individuals.

However, critics may question the relevance of this research, and claim that it lacks importance to our culture and that evolutionary scientists are romanticising the basic framework of a non-human society. However, such a sweeping dismissal of evolutionary development is ignorant. Whether this evolution is cultural, physical or genetic, it is naive nonetheless to dismiss it entirely. It is important to consider that although orca culture may not be as intricate as human, we are able to observe the behavioural practices inherited and coded by genetics. By having an understanding of the evolutionary origins of specific social disciplines, one can consider how our societal systems arose, or better, have the ability to reconstruct these systems. Exploring our phylogeny is an indispensable ingredient in allowing us to understand the reasoning behind our social behaviour, and build our own culture. If we look beyond our basic biological functions, we are able to see what we have built our complex societal, cultural and ethical systems upon. We can reflect on how they have matured and evolved (although still far from perfect), over the millennia these practices have existed.

Perhaps, by also recognising the phylogenic roots of the menopause, one can retract power from those who argue that it’s a natural disadvantage of women, and wrongly use the menopause as a tool to portray women as inferior. An understanding of the menopause’s biological purpose may help women in their experience of it, and help to place it in its wider context.

To conclude, although the menopause may appear as evolutionary inexplicable on a surface level, it is a valuable tool in exploring the reasons and development of social structures within orca populations, as well as the relationships between orca individuals. The menopause, although complex, has evolved to serve a basic purpose in the natural world- to increase the chance of survival, for both mothers, and kin.