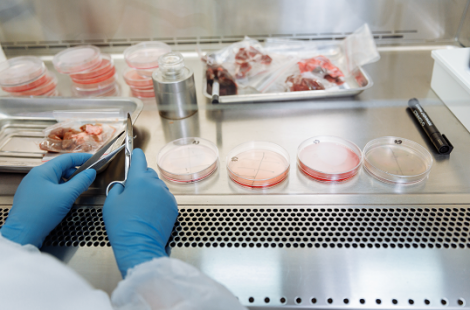 Imagine a world where you can enjoy any type of meat knowing that no animals have been killed or even harmed before it made it to your plate – it was grown from a single cell in a lab. Could this be biologically or economically feasible? Would it taste the same? Could it satisfy the increasing demand for food by the growing human population and solve climate change?

Over last few years, the boom in the market for plant-based meat alternatives has been hard to ignore, with companies like Beyond Meat and THIS becoming mainstream in restaurants and supermarkets over the world. However, the marketisation of lab-grown meat is only in its infancy – while plant-based meat is usually derived from soy, wheat gluten, or pea protein, lab-grown meat involves cultivating animal cells through a process called tissue engineering to create genuine animal meat without needing to raise and farm animals for food.

This futuristic idea is on the verge of becoming reality: in 2013 the first lab-grown burger was produced which cost $300,000 and 2 years to produce. Since then, in December 2020, Singapore’s Food agency approved the world’s first lab-grown meat product for sale, chicken bites from the company Eat Just can be purchased at the 1880 restaurant in Singapore for just $23.

The benefits are nearly limitless: as well as the obvious ethical advantage of not needing to slaughter animals, the demand for meat is accelerating with a growing population and so the scalability of the process means it could be the solution to food security and world hunger. It takes 2000 litres of water to produce a real beef burger, but a lab-grown burger would use between 10-100 times less water, as well as reducing greenhouse gas emissions and land use by the same amount. It also prevents the spread of food-borne illnesses and diseases of animal origin (which includes covid-19), and prevents the development of antibiotic resistance, since currently 70% of antibiotics are used on farm animals. So what are the issues?

The culture process : what actually is meat?
The cell culturing process begins with taking a muscle biopsy of the animal of your choice, and extracting individual stem cells from the muscle tissue. A stem cell is a cell which has the potential to develop to many different types of cell in the body, depending on the environment it is placed in. Meat is primarily composed of skeletal muscle cells, but also contains adipocytes (fat cells), fibroblasts (connective tissue), chondrocytes (cartilage) and a blood vessel network, all embedded in a 3D-scaffold structure called the extracellular matrix. This means that as well as obtaining the stem cells, which include muscle satellite stem cells (MSCs) and fibro-adipogenic progenitors (FAPs), these cells must be grown in an edible scaffold that provides the right environment for the cells to differentiate – getting this composition right is one of the challenges of recreating that ‘meaty’ texture.

The cells must then be transferred from a petri dish to a bioreactor where they can divide. The growth medium they are bathed in typically contains glucose, amino acids, salts, vitamins, water and a buffer systems which allows cells to replicate for a few days. However, for cells to continue proliferation in this new environment and not undergo programmed cell death, called apoptosis, the bathing medium requires a serum. The most common is fetal bovine serum (FBS) as it can supplement the growth of virtually all animal cell lines.

The FBS problem
FBS contains ~1800 different proteins, ~4000 metabolites, growth factors, hormones, antioxidants, lipids and many other unknown components that help to mimic a proliferative and fetal-like state. However, FBS is currently the main issue associated with developing lab-grown meat, since it is harvested from the blood of cow fetuses, from pregnant cows slaughtered by the meat industry. This completely defeats the purpose, since an estimated ~50 litres of FBS is needed to create one beef burger which would require the blood of 100–300 cow foetuses. The associated cost also makes it economically unviable: a litre of FBS costs between £300-£700, bringing the cost to ~£4400 per burger. Currently no lab-grown meat has been made without FBS, so the challenge scientists are working on is identifying the specific combination of growth factors required for each type of meat, and artificially manufacturing these through recombinant DNA technology. Serum from the company FastGro promises such results without using animals, but is still being developed and comes with a large price tag.

Before mainstream commercialization of lab-grown meat, several other issues also need to be addressed. Differences in nutritional value are unknown particularly when considering micronutrients and iron, dysregulation of rapidly dividing cells runs the risk of cancerous cells developing, the diversity of tastes and textures from different animals cuts will be hard to replicate, scaling up from laboratories to factories must be able to prevent contamination, lab-grown meat will have to compete with plant-based meat alternatives, many consumers are not open to such ‘unnatural’ food, and religious authorities continue to debate whether the meat would Kosher or Halal.

Investment in lab-grown meat reached £257 million in 2021 with over 70 start-up and is set to rise in the coming years. So for those willing to try it, there is promise for lab-grown meat to make it to your plate in the not-so-distant future.