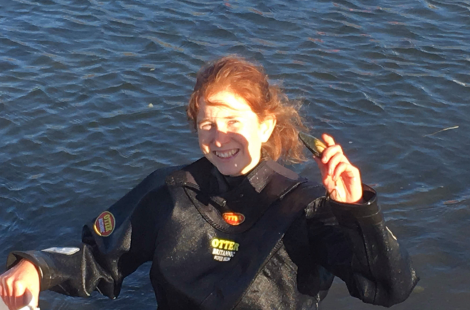 Hi! I’m a PhD student studying aquatic ecology.  In particular, I study freshwater mussels and the important roles they play in river and lake ecosystems, as well as the threats they are currently facing as a result of human activities and the climate and biodiversity crisis.  My research involves a combination of fieldwork, lab work, and working on a computer to read and collate evidence from the academic literature.

Freshwater mussels are unknown to many people, yet they provide vital services to ecosystems and are found on every continent except Antarctica, and right across the UK (including here in Cambridge, in the River Cam).  Mussels live in riverbed sediments and feed by filtering water, selecting the particles (algae and small pieces of organic matter) they need and discarding the rest, depositing it on the riverbed.  Because of this, mussels help to keep water clear and prevent the growth of algal blooms, which in turn benefits important aquatic plants and promotes biodiversity.

Despite this important role in promoting healthy ecosystems, freshwater mussels are one of the most endangered animal groups globally.  However, we have little information on how their population numbers are declining.  To understand this better, we need to know about past ecosystems and for this, we have to turn to some detective work.  Ancient mussel shells could provide one important clue.  I have been working with shells discovered during the archaeological excavation of a Bronze Age settlement near present-day Peterborough.  These shells, which have survived mostly intact for over 3000 years, can yield insights about the state of ecosystems before humans started to alter the landscape.  Mussel shells display annual growth rings in a similar way to trees, and like tree rings we can use these to infer information about growth rates and growing conditions during the animal’s lifetime.  By comparing patterns of growth rings in the Bronze Age mussels with live animals I collected from present-day rivers near the site, I was able to show that growth rates in modern populations are much higher than in the ancient population.  Although it’s difficult to determine exactly why this is, we think that nutrient enrichment of rivers, mainly due to fertiliser runoff from farming, means more food is available to mussels.  In turn, their faster growth could mean that they are filtering more particles and helping to buffer rivers against the effects of farming.  I’m planning to test this hypothesis through lab-based isotopic analysis of the modern and ancient shells.  By looking at the ratios of heavy to light versions of different elements (especially nitrogen, carbon and oxygen) we can make inferences about environmental conditions when the shell was formed, including temperature and food availability.

As a conservationist, it’s important to me to think about how we can protect and preserve species for the future, as well as studying how they have declined in the past.  As a non-charismatic species that people don’t often see, mussels can be neglected by popular conservation efforts.  One way we can raise their profile is by increasing awareness of their important role in ecosystems.  The concept of ‘ecosystem services’ is gaining traction across the fields of conservation and economics as a method of quantifying the ways that wild species benefit humans, and estimating the economic value of these benefits.  I am currently participating in a Europe-wide collaboration of aquatic ecologists to investigate, summarise and calculate the value of ecosystem services provided by freshwater mussels.  We hope that by drawing attention to these crucial but often hidden services, decision-makers will place more importance on protecting species such as mussels.  Collaborative projects like this one are an important part of contemporary scientific research, since they allow researchers to combine expertise, resources and workload as well as gather information and share insights across a wide geographic area.  Climate change and the biodiversity crisis are global problems, and scientists can hope to make a difference by joining forces, and working across fields, to come up with solutions.