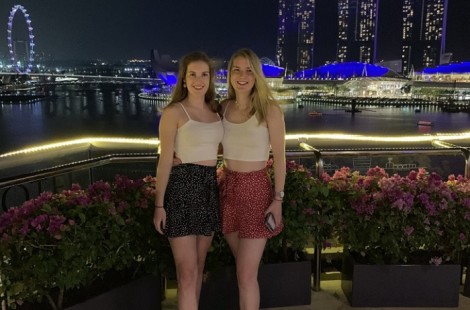 Using Gateway and Rosemary Murray Travel Funds allowed me to travel to Singapore for six days this summer with my sister.

Singapore had always been somewhere I had wanted to visit, partly due to its diverse culture and amazing architecture, but mainly because it is where my father was born, so I have always been keen to see where he grew up.

During our action packed trip we had a chance to explore the main shopping area in Singapore: Orchard Road. We had never seen so many shopping centres in our lives. Although not the most cultural experience, in the basement of the shopping centres were hawker centres, selling traditional Asian and Singaporean foods. Along Orchard Road is Emerald Hill, a very colourful street of Chinese Baroque architecture home to many members of the city-state's wealthy Peranakan community. This was a dramatic change to the adjacent modernised shops. On the same road we tried a well-known treat, an ice cream sandwich with rainbow bread.

One of the highlights of the trip was visiting Raffles hotel, which had been recently refurbished. My sister and I both tried a famous Singapore Sling in the iconic Long Bar, along with many peanuts! We had a wander around Raffles to see the refurbished buildings, which maintained the colonial style and architecture that has made Raffles so iconic.

Due to the fantastic location of our hostel we were able to walk to Marina Bay area, where we saw the Merlion statue and views over Marina Bay Sands hotel. We found a restaurant overlooking the bay and watched the light and laser show at night. We visited Gardens by the Bay, a nature park consisting of different gardens and features as well as indoor conservatories. We explored the Flower Dome and Cloud Forest, with plant species from all over the world and treetop walkways. In the evening they put on a light and music show on the super-trees.

Going for a drink and meal at Lavo restaurant at the top of Marina Bay Sands with views over the whole of the city, particularly during sunset was amazing. We were able to look out onto all of the attractions we had visited during our stay and appreciate the engineering and planning that must have gone into the building of Marina Bay Sands, especially the rooftop pool. We returned to the ground floor and had time to look around the Shoppes under Marina Bay Sands and watched the fountain and music show on the water. On our return to the hostel we walked over the Helix bridge, which is illuminated at night and built to illustrate the double helix DNA structure.

On a day trip to Sentosa Island we travelled by cable car from the mainland harbour to the island and also around the island. Our first stop was Fort Siloso, where we learned about the history of Sentosa and Singapore, particularly how it was used as defence during WW2 and taken by the Japanese. We then walked along Palawan Beach to the southernmost point in Continental Asia. We went to the Merlion statue on Sentosa, which was much bigger than the original and walked around the grounds nearby. Our cable car ticket allowed us to take a trip to Mount Faber, with panoramic views over Southern Singapore and Sentosa.

Overall, it was an amazing trip. I saw all the main attractions in Singapore and travelling independently as well as budgeting my spending provided valuable life experience. I’m so grateful for Gateway and Rosemary Murray Travel Fund for giving me this opportunity.

Mkpouto Pius: Getting ready to start my biotech enterprise