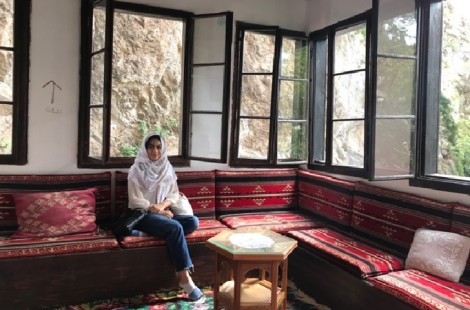 Bosnia and Herzegovina had been on my ‘bucket list’ for a long time, and from what I had heard from others or read in travel blogs (or even in my International Relations reading!), I knew it was a country with a tumultuous recent history whose wartime remnants were very much present. With funding, I was able to discover this for myself.

We flew to Sarajevo in late September and from there took the train to Mostar, on a train journey known to be one of the most scenic in the world. English is spoken here and there in Bosnia, so there was only a little trouble buying a train ticket, mostly coming from having to decode words like ‘carriage’: ‘kočija’, that were on the paper ticket I received. Bosnian is one of three official languages of Bosnia and Herzegovina, alongside Serbian and Croatian, and features some Arabic and Ottoman Turkish loanwords, given the country’s Islamic cultural ties. The train journey, as I hoped, was absolutely beautiful – the rail route passes through the mountains and at one point alongside the Neretva River. Pictures really don’t do it justice.

We arrived in Mostar, which is the country’s fifth largest city, known for its Old Bridge, built by the Ottomans in the 16th century. Mostar was the highlight of my trip, it was so rich in natural beauty and Islamic architecture, and as a Muslim, it was lovely to be able to pray at a few of the historical mosques. The Old Bridge provided a lovely view of the river, and I was able to see some locals jumping off the bridge into the river, something they do competitively earlier in the summer! About a 30 minute bus ride from Mostar is a town called Blagaj, renowned for its ‘Tekke’, or Sufi monastery that is almost 600 years old and built right at the source of the Buna River, basically merging with the cliffs alongside it. Even though it’s a popular tourist destination, there was something so calm about looking out over the river – the water was such a bright blue-green and so clear! It is custom to cover your head if you’re female and cover up in general before entering the monastery, where there were lovely Ottoman rugs and old copies of the Qur’an in many of its rooms. We only had one day in Mostar (although I wish I had longer!), and the next morning we got the train back to Sarajevo at 6am, which although meant we were sleep-deprived, also meant we were able to see more gorgeous views from the train.

I truly hope that people visit Bosnia and Herzegovina, and I am really grateful that Gateway funding gave me this opportunity. It is a country that does not seem to have the same ‘tourist buzz’ as many Western European cities, but it is filled with a rich culture (amazing baklava and coffee!), natural beauty, history, and scars from recent conflict that made for a fascinating six-day trip.