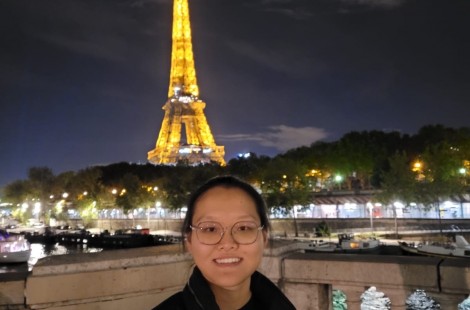 In September 2022, I visited France, funded by the Gateway Challenges Funding and Rosemary Murray Travel Awards. It was a six-day trip to visit the numerous cultural attractions Paris had to offer.

A challenge I faced even before embarking on the trip was researching and having to build an itinerary with the places I wanted to visit, as well as learning how to navigate France’s public transport system. Although, throughout my six-day trip, I did try to walk as much as possible, so that I could see more of the city.

Starting off in the UK, I took a flight to Paris (it was cheaper than Eurostar). The first day was relatively short, as I arrived quite late in the day, and spent it exploring the area around the Eiffel Tower (which was quite close to the AirBnB I stayed in), and enjoyed its beautiful night view and the light show.

The second day, I took a trip out to Versailles to see the Versailles Palace. This was one of the days I enjoyed the most, as the palace was massive and filled with history, and I found the place really beautiful.

On the third day, I visited the Louvre, spending the majority of the day there, and the attractions near it – the gardens near the Louvre (Tuileries Garden, and Jardin des Champs-Élysées), as well as Place de la Concorde (one of Paris’ public squares).

The fourth day was spent visiting Montmartre, specifically going to Sacré Coeur de Montmartre and the Wall of Love. Closer to the evening, around the time of sunset, I also took a river cruise along the Seine river and listened to the audio commentary on facts about the various landmarks in Paris.

On the fifth day, I visited the museum, Musee d'Orsay, as well as Sainte-Chapelle, Notre Dame, the Pantheon and the Luxembourg Gardens. On the last day, I visited Arc de Triomphe and Champs-Elysees, before having to take the flight back to the UK. Throughout the six days, I had some of my meals at some restaurants in the city, and managed to try out some French cuisine.

As someone who grew up in and lived most of my life in a modern city in Asia, it was amazing to see the number of cultural and historical sites in France. I really enjoyed seeing the art pieces in the museum, and visiting the places of historical significance. Exploring Europe has always been something I wanted to do, and I’m grateful to Gateway for giving me this opportunity.