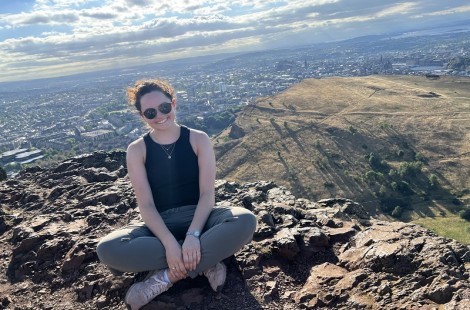 During the summer of 2022, I used my Gateway Challenge Funding to visit Edinburgh during the world-famous Fringe Festival. Since I had never been to a theatre festival before, I was excited about the opportunity to experience a wide variety of artistic perspectives and challenge myself to think critically about art and theatre, while also learning more about Scottish culture.

I had the opportunity to support Cambridge student artists during my week in Edinburgh by attending a performance of Living with Sin, a musical funded by, and performed by members of, the Cambridge University Musical Theatre Society. This show was also written by my course mate, so I was excited to support a friend’s creative work. In addition to this show, I also saw several other stand-up comedy performances by comedians from all over the world.

Because I grew up in a desert climate, I had always wanted to see the Scottish Highlands and enjoy the green, natural landscape. As soon as I got off the train in Edinburgh, I dropped off my bag and climbed Arthur’s Seat, an ancient volcano with a trail leading to the highest point in Edinburgh. While I had also planned to explore the Highlands for a day, my bus was sadly turned around a couple hours after taking off due to a closed road (although I did get a chance to pet a highland cow before we turned around). Thankfully, as I was traveling with another Murray Edwards friend, I had someone to laugh with despite the hiccup in our plans.

Overall, my experience attending the 75th Fringe Festival and exploring Edinburgh was truly memorable, and I’m thankful to the Gateway program for supporting this unique opportunity.