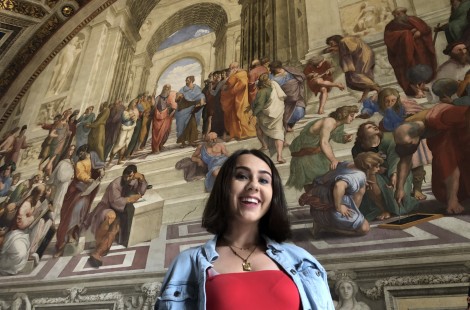 One of my goals for the trip was to try authentic Roman dishes. I am super interested in Italian cuisine so, although I have been lucky enough to visit Italy before and have eaten some delicious food, I wanted to try new meals that explained some of the rich history of Rome.

The first restaurant we visited, the unusually named Ragno D’Oro (‘The Golden Spider’) allowed me to do this as I ordered 'Carciofi Alla Giudia'. They are Roman-Jewish fried artichokes and the recipe is believed to potentially date back to the Roman Empire. I also ordered carbonara, a traditional Roman pasta dish. Despite having made and eaten many bowls of carbonara in my life, I had never tasted anything like this. Made the classic way, omitting cream and simply using egg and cheese, created an incredibly tasty dinner. Another dish from Rome that I was particularly excited to try was ‘Cacio e pepe’. A while ago I stumbled upon a youtube recipe video for this notoriously difficult pasta sauce and became fascinated with it. Literally translated as ‘cheese and pepper’, this minimalist sauce appears easy but is deceptively difficult. I was less keen on the actual taste of the sauce as it was slightly too tangy for my liking, but nonetheless I was thrilled to have actually tried the dish I knew I did not have the skills to make!

Another reason I applied for Gateway challenge funding to Rome was to soak up the rich culture. On my list of must-sees was Raphael's painting 'The School of Athens' in the Vatican museum. We studied this painting in A2 Philosophy because it depicts Aristotle and Plato and their differing epistemologies, with Plato pointing up to the world of the forms and Aristotle pointing below, thoroughly grounding his reasoning in the empirical world. In Lent term, I applied Aristotelian thinking to Renaissance texts in quite a few of my essays, so to see this magnificent High Renaissance composition live in the flesh was absolutely mind blowing. I bought a poster from the gift shop for my room to remember the Vatican and all the other moments during this trip spent gazing at the amazing art works. Every church we wandered into was adorned with the most beautifully detailed frescos on the ceilings.

Although it was breathtaking to see the famous Creation of Adam fresco painting on the Sistine Chapel, the ceiling of Sant'Ignazio surprised me in its beauty. I later learned that the proper term for it was a troupe l'coeil ceiling because it had so many optical illusions that created great depth, making the church seem to stretch up and outwards. It even had a fake dome painted on the ceiling to make the church appear more grand. Alice and I titled it, 'Dome from Home'!! We also visited the Trevi fountain and the Colosseum, which were both staggering; the sheer size of both stunned me and meant that I could not really comprehend them. But, as I threw a coin into the Trevi fountain, I know that I will return to Rome and hopefully see these sights and more again!

Thank you so much to Gateway for funding this trip of a lifetime! It was a phenomenal highlight to my summer.