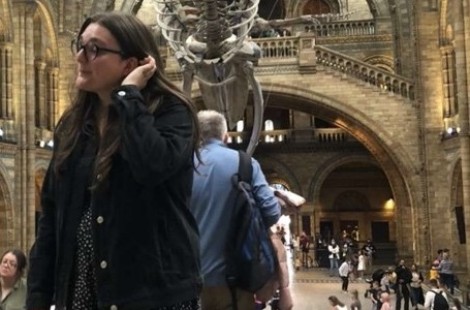 During the summer of 2021, I used the Gateway fund and the Murray Edwards Travel Bursary to visit Shakespeare’s Globe and other literary sites in London for the weekend. The money funded my train, accommodation and activities in London.

My main aim of the trip was to go on a guided tour of The Globe Theatre. As an English student having just done a Shakespeare paper in first term, it was so exciting and interesting to see the stage that some of Shakespeare’s plays were written to be performed on. It was interesting to see some of the original features of the theatre and to truly understand how the staging can affect your perception of the play, being able to sit in a few different seat locations during the tour. The tour also provided some understanding of the historical context around the Globe covering its rebuilding to the types of people and atmosphere in the theatre during Shakespeare’s time. In literary keeping I also made sure to visit some of the pubs named after Shakespeare although it is possible to still drink in pubs Shakespeare himself would have frequented such as The George Inn (on Borough High Street)!

I stayed in the Westminster area which was ideal for visiting another literary landmark – The Poet’s corner in the South Transept of Westminster Abbey which started with Geoffrey Chaucer (buried there in 1556) and a list of other prominent literary figures including Thomas Hardy, Charles Dickens and Alfred Tennyson subsequently interred there. There are also other notable literary figures buried elsewhere but still commemorated in the sort of “Literary Hall of Fame” such as Shakespeare (who is actually buried in Stratford-upon-Avon).

I also made use of some of London’s free museums, the most interesting being the Natural History Museum, if you want to feel small compare yourself to the full-size blue whale! I spent a lovely afternoon looking at some of the amazing exhibits they have – I am a big fan of the dinosaur exhibit. It was also interesting to just take in some of the major landmarks from afar such as The London Eye, The Houses of Parliament and Big Ben.

Whilst being informative trip contributing as research for my degree, the weekend also doubled as a trip of self-development, helping to build my confidence traveling alone. A major win for me was successfully(ish) navigating the tube and checking into a hotel by myself for the first time. It was a fantastic opportunity that would have been tricky without Gateway’s support.