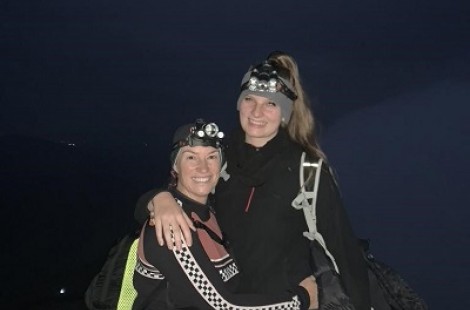 For my Gateway challenge, I decided to complete the three highest peaks in the United Kingdom: Ben Nevis (Scotland), Scafell Pike (England) and Snowdon (Wales).

On the morning of the 14th of August we travelled 220 miles from Wakefield to Glasgow. Here we stayed for the two evenings either side of climbing Ben Nevis. The journey to Glasgow totalled three hours, leaving us with sufficient time to rest before our 4am journey to the tallest mountain in the UK. Ahead of us was a 120 mile drive to Fort William prior to the hike. We began our 1345m ascent up Ben Nevis at 7.30am, following the ‘Mountain Track’. With a quiet path and ideal conditions, the ascent allowed us to enjoy the views and to set a suitable pace also. The final 400m climb was cold and grey as we reached the clouds, but after 3 hours and 10 minutes we reached the summit. The 2 hours and 30 minute descent was tough as the terrain presents scree and a rocky, uneven surface. Hence, the 9.8 mile hike totalled 5 hours and 40 minutes. From Fort William, we had a 3-hour car journey back to Glasgow for another night’s rest before an early journey down to the Lake District.

At 6am on the 16th of August, we left Scotland for another 2 hour and 45 minute car journey to the Lake District for our journey up the tallest mountain in England: Scafell Pike. Again, with ideal conditions, we began the ascent up Scafell Pike at 9.30am. The 978m incline of Scafell Pike presents a continuous and intense incline. The terrain is also less forgiving than that of Ben Nevis, but nevertheless we reached the summit of Scafell Pike in 2 hours and 10 minutes. We were able to enjoy the views that the peak had to offer us during the hike. The 2-hour descent was difficult due to the scree and the steep decline, as well as battling aching legs from the previous day. The 6-mile hike of Scafell Pike totalled at 4 hours and 10 minutes. Promptly, we set off back to Horbury, Wakefield with a final 3-hour journey home.

For the final peak, we planned an early morning hike up Snowdon on 4th September, in the dark, to see the sunrise at the summit. This added a further challenge to the hike, as this would be my first experience of nightwalking, using a head torch. We travelled from Wakefield to Wales at midnight, ready for a prompt climb up Snowdon on the Llanberis Path at 3.15am on the 4th of September. Using head torches to guide our way up Snowdon, visibility was to an absolute minimum, especially as we found ourselves in the clouds. Despite the lack of visibility and an extremely quiet path, we reached the summit of Snowdon’s 1085m ascent in 2 hours and 30 minutes. Unfortunately, due to the cloud coverage we did not see the sunrise. The 2-hour descent was enjoyable as the terrain was forgiving, especially as we were able to see not only the path but also the sights from the mountain. Hence, the 9-mile hike totalled at 4 hours and 30 minutes.