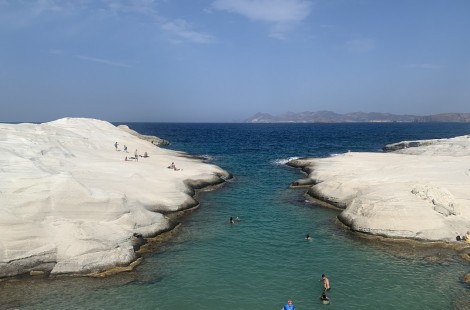 I spent three weeks travelling in Greece, on what was an incredibly memorable post-graduation trip. Starting off in Athens, I travelled by ferry to three islands, each of which possessed its own particular character, culinary specialities, and stunning scenery.

The first was Folegandros – a small, quaint island known for its hidden beaches and mountain hikes. After breakfast, we would set off through Chora, the main town, and embark on an hour-long hike to a nearby town on the coast. One evening, we walked up to the Church of Panagia, the highest point on the island, for an incredible sunset view.

Next was Milos, one of the larger, better known islands. A trip to the north shore of the island on our first day, to visit Sarakiniko beach (or the ‘moon beach’), was probably a highlight. Unlike any beach I’d visited before, the cliffs were completely white and made of volcanic rock. The main town, Plaka, was beautiful, with cobbled streets, hidden paths and traditional, outdoor restaurants – it felt like little had changed since its creation in the 18th century.

My favourite island, however, was Sifnos. Known as the perfect island for foodies and hikers, it had the perfect balance of culture, fun and relaxation. A hike to the Chrysopigi Monastery, built in 1650 and located on a rocky peninsula attached to island, the Chapel of the Seven Martyrs for a breathtaking panoramic view, and a night swim at Vroulidia beach were all fantastic. The local delicacies were chickpea balls with dill (revithokeftedes), goat cooked in wine (mastelo), caper salad (kaparosalata), and a chickpea stew cooked for 48 hours (revithia) – we tried them all!

Our last stop was Athens. As a history graduate, I loved the way that tourist attractions and conventional towns, restaurants and shops were interspersed with ancient ruins and historic archaeological sites. My favourites were the Acropolis Museum, the Ancient Agora, and going for an early morning run around the track at the ancient Olympic Stadium!

The trip was truly unforgettable, and being able to travel for three weeks after a year in lockdown felt really special. Thank you to everyone involved in the Gateway programme, and the Rosemary Murray Travel fund – I’m so grateful.