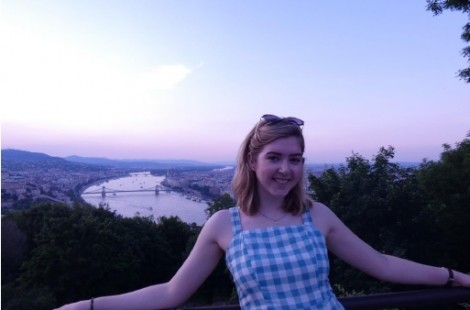 This summer I used Gateway funding to go on an amazing four day trip to Budapest with a group of friends from college. It was an incredible experience and the best way to escape from the Cambridge bubble at the end of a long exam term. Despite it being a relatively short trip, we definitely made the most of the opportunities the thriving city presented. I had not previously had the opportunity to explore an eastern European city so I was interested to find out more about the culture now, and how it has changed since being under the influence of communism.

On the first day we got our bearings in the city and, using some good old-fashioned map reading, explored some of the main squares and areas of Pest. Budapest is actually made up of two main areas: Buda (the older part) and Pest (the newer part), which are separated by the river Danube and are connected by several striking bridges. That first evening we made our way down to the river and, as the lights of the boats and buildings reflected off the water back at us, really felt a sense of tranquility amongst the city that never sleeps. Over the next couple of days we explored historic buildings such as Matthias Church, the Hungarian Parliament, as well as visiting museums. One I found particularly interesting was the
House of Terror, which contained exhibits related to the fascist and communist regimes in 20th-century Hungary. This was an area of history I had not examined in detail before and it really gave me a greater understanding of the oppression experienced by many groups under Soviet influences.

In order to counteract the sombre tone we had just been left with, we decided to pay a visit to the Gellert Thermal Baths, which are located in Buda. The architecture here was truly impressive and its Art-Nouveau style makes for a very grand bathing experience. The final part of our exploration of Buda involved climbing the 235m high Gellert Hill to watch the sunset from the Citadel. This was the perfect way to round off our trip as we got to view the entire skyline basking in the light of dusk.

Overall it was an amazing trip with some amazing people. I am extremely grateful for the opportunity Gateway funding gave me and I would thoroughly recommend the programme to future students.