School Winner: Could the neutrino be the most interesting particle in physics? 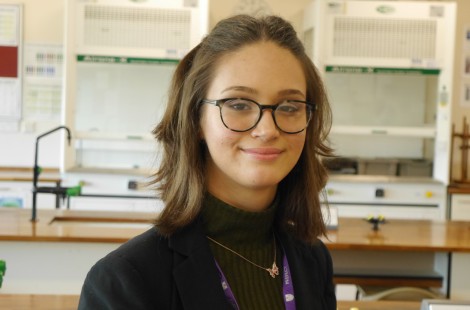 As the science of the universe, physics aims to understand the events of the world on several different scales. Consider the extremes of these scales: there is research into particle physics, which investigates particles as tiny as 10-18m (quarks); whereas, on a much bigger scale, the largest galaxy we currently know about (IC 1101) is estimated to be millions of light-years wide, with one light-year being 9.461x1015m for comparison.  In order to truly understand the extremes of the universe, scientists must apply their knowledge of the tiniest elements of matter to a much grander scale.

One of the greatest mysteries within physics today is dark matter. Dark matter was postulated in the 1900s, and observations made by astrophysicists supported the theory that there must be more within the universe than just the normal ‘luminous’ matter that can be seen and detected. It was theorised that in spinning galaxies luminous matter must spin faster in densely packed areas where mass is concentrated, but that towards the edges of the galaxy, where mass decreases because matter is more sparse, the velocity of the luminous matter must decrease. This is because where mass is concentrated, there is a stronger gravitational field strength, resulting in a greater velocity due to the greater centripetal force acting on the mass.

This can be seen using the equation: Fc =

, where Fc is centripetal force, m is mass, v is velocity and r is the radius of the galaxy.

Rather problematically however, it was observed that the luminous matter in galaxies spun with a uniform velocity throughout, regardless of how densely/sparsely packed the matter was. It was thought that this proved that there must be something else in the universe affecting the gravitational field strength of these galaxies, with enough mass that this mystery something’s gravitational pull could cause the luminous matter to spin with the same velocity at each point.

Whilst we don’t yet know what constitutes dark matter, there are some things it cannot be. For example, the particles that make up dark matter cannot be charged, as the ‘dark’ in dark matter refers to its physical characteristic of being invisible to the eye – meaning that it doesn’t interact with photons of light in any way. As (virtual) photons are the exchange particle of the electromagnetic force, which affects all particles that are charged, then if dark matter is unable to reflect light it cannot be made of a charged particle. Furthermore, dark matter cannot be baryonic, as all baryons are by nature unstable, apart from the proton. Therefore, all baryons will eventually decay into protons, which have a positive charge, and so would be affected by the electromagnetic force.

One possibility is that dark matter is made up of neutrinos: neutrinos have no charge, they are not baryons, and they rarely interact with matter. This last point is important because, whilst dark matter’s effect on the universe can be observed, dark matter itself rarely interacts with normal matter - making it incredibly difficult to detect directly. However, in order to exert the required gravitational pull, dark matter must have a specific mass. Whilst it was thought previously that neutrinos had a mass of zero, it was recently discovered that neutrinos have the ability to change flavours, for example from an electron neutrino into a tau or a muon neutrino during flight –  something that could only be considered possible if the neutrino had a non-zero mass.

To conclude, if the neutrino’s mass works out to be the mass needed to account for the dark matter in the universe, it could result in the neutrino serving a much more important function than just conserving energy, as originally thought, instead being responsible for making up approximately 85% of the matter in our universe.

School Winner: Why is the cello the wrong size?

School Winner: Can a fish save the brain?