Miriam Quinn: Producing a play at the Edinburgh Fringe Festival 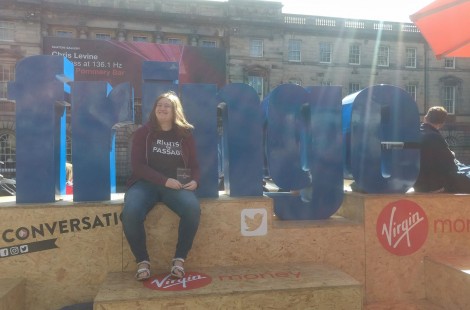 The generous support of Gateway enabled me to spend two weeks at the Edinburgh Fringe. I was primarily here to produce a play. As President of Oxfam Cambridge University I had initiated the staging of a play, Rights of Passage, in Cambridge last Michaelmas. The play told the story, in their own words, of three LGBT refugees.  After the success of this run, we made the decision to try to take the play up to Edinburgh.

Working on the play in Edinburgh was immensely rewarding. Our first week was spent rehearsing, working on staging, and beginning to publicise the play. Come rain or shine, our team could be found on the streets of Edinburgh, giving out flyers and engaging people in conversations about the play and the issues it raised. Even when people weren’t able to come to the show, it was great to have a discussion about the important causes the play was about and supporting.

A lot of my time was also spent trying to network with relevant groups- whether that was Oxfam shops in Edinburgh, groups supporting LGBT people or refugees in the region, or other productions on similar topics. It was great to meet other people with similar interests, and to learn more about the inspiring work they were doing.

We staged our play for seven nights, and were really pleased with our turnout, allowing us to spread the message, and also to raise money for Oxfam in the process. It was very exciting being inside a proper theatre, with all of the lighting and sound possibilities this provided, and to have members of the public as well as reviewers come to see the show.

As well as our play, Gateway funding gave me the opportunity to experience some of the diverse range of productions that make up the Edinburgh Fringe. From a brilliant, hard-hitting performance of the Reluctant Fundamentalist, to the inspiring musical of Made in Dagenham, to unpromising sounding but ultimately fascinating student-written productions, it was incredible to be able to explore so many art forms and storylines. Simply being in Edinburgh at this time, walking down the street and being surrounded by street performers and people trying to sell all manner of shows, was an amazing buzz and something unlike anything I have experienced before.

Although my focus was on the Fringe, I tried to make time as much as possible to explore a bit of Edinburgh, as well as the other festivals happening there during August. Climbing Arthur’s Seat provided sweeping views of the cityscape and across the sea, whilst a trip to Leith showed a side of Edinburgh not taken over by festival season. I also particularly enjoyed popping into the Edinburgh book festival, where the site of dozens of people sitting outside with a library of books on offer for them was lovely to see and be part of.

I’d like to extend my thanks to the Gateway programme for making all this possible!