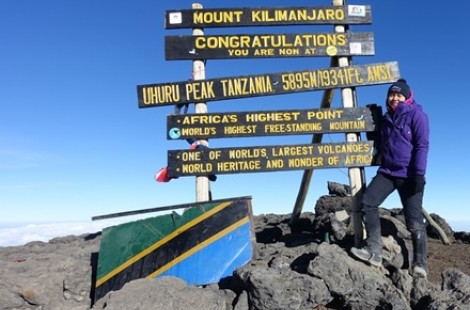 It all started on a Friday afternoon in the first year of my sixth form. The speaker of this Friday series talk was an experienced mountaineer who has climbed the highest mountain on each continent. Although a strenuous journey was depicted, every word of that talk inspired and encouraged me only more. The goal of conquering the seven summits was seeded in my mind.

Later that year I had the opportunity to go on a three-week summer expedition to the Indian Himalayas with generous support from the Ogden Trust. Having ‘survived’ and reached 5004m during my Himalayas expedition, I started my training plan for Kilimanjaro. It was my first time standing on the African continent, the scenery was so different from what I have seen before and the town we stayed in briefly was very vibrant, cheerful and full of colours. We drove to the Lemosho gate (elevation 2100m) after a day of rest, where we would start our seven-day climb.

It was an easy and comfortable climb on the first day. I was perhaps overly optimistic at the time, before mild altitude sickness started to kick in. The next day was a lot more difficult; we walked 15.6km and ascended just over 1000m in altitude. The moorland features of the route made it an interesting journey with exotic and colourful plants and flowers. By the time of dinner, I started to feel slight headaches and loss of appetite. The next day, however, was the second hardest day during the climb. We climbed up to the Lava Tower camp (4642m) for lunch before descending to sleep at a lower camp. I was so nauseous that I could not take in anything during lunch and it was such a tiring trek that I managed to fall asleep during water breaks. However, the trip to the Lava Tower was essential for acclimatization, and I felt a lot better the next day. The routes for the next two days were much more exciting, with a lot of rock-climbing elements which I really enjoyed.

And finally, it was the summit (attempt) day. I was so excited that I could not fall asleep during the rest break before we set off, which is definitely not advisable. We departed at around 11.30pm, well-covered with as many layers as possible as it could get to -10 degrees or lower during the summit attempt. It was pitch-dark, only the light from headtorches could be seen. The reason behind this particular start time is to stop you from knowing how far away the summit it, which definitely helped me immensely.

After endless hours of walking and ‘sleep-walking', we finally arrived at the bottom of the Stella Point. A glimpse of light from the sun could be seen from afar, and I finally grew more awake gradually after almost 6 hours of walking uphill. And at that point, the hardest part was over. I was so tired that I could not feel the tiredness anymore. The challenge was to remain focused and committed, maintaining the mental power.

It was interesting as I did not have a great deal of emotion when I reached the Uhuru peak, probably because I was already drained mentally and physically. The sunrise was magnificent and I saw sheets of clouds, snow caps on the mountain, and countless other things beneath where I was standing. It is the highest point on this continent.

I always think that every journey in life, every small step, and every word you say is life-changing in its own way. This trek was much harder than I had expected, and it taught me so much more about perseverance and persistence when working towards a goal. I am very grateful to all the people I met during the trip, especially the team who supported us along the way, who not only had expert knowledge but also the most care-free mindsets. As they always say, ‘Hakuna Matata!’ (No worries!).

My sincere gratitude goes to the Gateway Challenges Funding and Rosemary Murray Travel Exhibitions, without which I would not be able to complete this incredible trip. And this with no doubt is only the beginning.