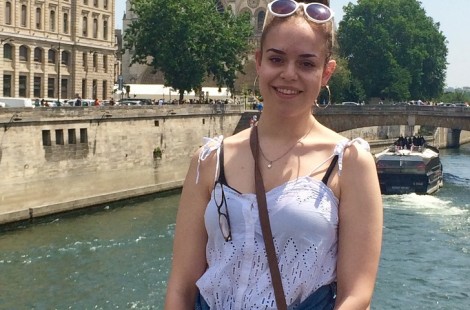 My trip to France, funded by Gateway, has been an amazing journey of personal and academic growth, as well as a lovely holiday for me! Being surrounded by the language has really helped to strengthen my French, and I have noticed that my accent has improved considerably since going to France.

Paris was such a great experience, and I was able to visit Le Tour Eiffel, the periphery of Notre-Dame, a deportation memorial, Sainte-Chapelle, the Seine, the museum of immigration within the Palais de la Porte Dorée , the Musée de Cluny, the memorial for the Algerian War and a number of cafes. Being in Paris all alone was such an exhilarating feeling. Although it was scary at times, I can see how much my confidence and independence have grown through this trip, and it also allowed me greater immersion in the language. Paris was truly incredible – beautiful, interesting and so vibrant, it will remain a special memory for me.

However, Rouen was my favourite place of the two, and I found that the greater freedom that I had by staying in an apartment rather than a hotel suited me very well. Here, I had fewer time pressures, and so I was able to be more adventurous, exploring whenever I felt I could diverge from my route. I would never have imagined I would be spontaneous like this (it’s really not in my nature) but in doing this I saw not only my planned sites – the Musée des Beaux-Arts de Rouen, Place Saint-Clément, Saint-Ouen, le Donjon de Rouen, le Jardin des Plantes and l’Historial de Jeanne d’Arc – but I was also able to discover bakeries, le Gros Horloge, the main cathedral in Rouen, and I ascended to the heights of Rouen to see the most incredible view.

I can’t say that it was all plain sailing. I got lost using the Metro and there were a few times when I struggled to understand some people. I got awful migraines one night and had no one to help me. I bought the wrong train ticket. Someone tried to scam me. However, these were relatively minor incidents, and I was able to overcome the issues that I faced without becoming too overwhelmed. It was all a part of the experience, and naturally someone as new to travelling as me would make mistakes. I was prepared for there to be errors, and so this made it easier to move onwards and upwards, able to enjoy the rest of my stay.

To say that this trip has been good would be a severe understatement. Exploring another country after experiencing only one holiday before in my lifetime has been incredible, and I have had so much fun. I have also experienced immense personal and academic growth over the course of the trip. My French has greatly improved, as well as my confidence in my ability to speak the language, and I hope to go on to do a language course next year alongside my History degree, if possible. The museums provided me valuable insights for my History papers, with the ability to see artefacts from these periods giving me a further understanding that went beyond what can be read in books. To be able to see the Algerian War memorial after studying the Algerian War was a special and sombre moment for me. To have gone to France all by myself with limited travelling experience, to speak the language to strangers, to return more confident in my abilities and more confident in myself has meant so much to me.