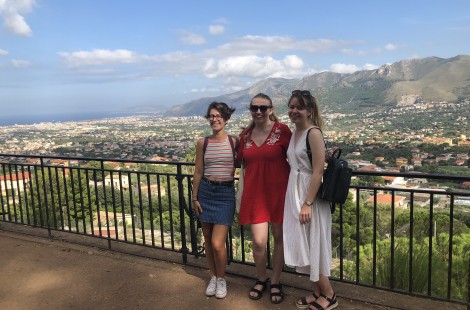 From the 2nd to the 9th of September, I travelled to Palermo in Sicily with two of my closest friends from college. It was my first time travelling with a group of friends abroad, and we definitely made the most of the opportunities that the beautiful island of Sicily presented.

Surprisingly different from mainland Italy, it was fascinating to explore what was once the hideout of the Sicilian Mafia, made famous by films such as The Godfather. We went on walking tours that paired history with street food, learning about the multicultural history of Palermo (which has had Greek, Roman, Byzantine, Arab, and very briefly French rulers) while sampling street food like arancini, sfincione, cozze, and of course cannoli.

We visited beautiful beaches and breathtaking mountain ranges, as despite being a volcanic island Sicily has amazing scenery. The best view was from the top of Mount Etna, the planned activity I looked forward to the most prior to the trip. The feeling of satisfaction after climbing Europe’s highest active volcano was only matched by that generated by finding an authentic, family-run trattoria where the owner recognised us and served us peach wine.

Aside from learning about Sicily, we learnt about ourselves and each other - one moment in particular that springs to mind as a learning experience was memorising, “Excuse me, we have a connecting flight” in Italian as we prepared for a 30-minute connection in Milan.

Gateway has definitely helped me develop, not only academically in the sessions but also personally through Challenges funding, and I would recommend the program to any student in a heartbeat.