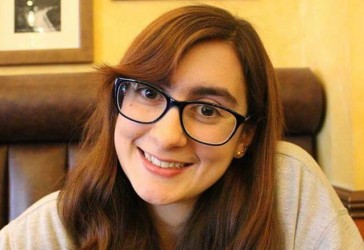 I became interested in Engineering through my Dad, who was a draughtsman for Dowty Mining. When I was young it was always ‘how does this work?’ and ‘why?’ Later on, I took part in a bridge design challenge at secondary school, using rolled up paper tubes to make the strongest structure possible. I later attended two design and build Smallpeice Trust engineering courses (railways and structures). Having thoroughly enjoyed both and having been inspired by people working in the industry (both male and female), I set my sights on studying engineering, and where better than at Cambridge?

For the first two years the engineering course at Cambridge covers four areas; Mechanical, Structural, Electronic and Mathematical Methods. Although different from most universities, this is really helpful as you gain a level of understanding across all the major disciplines of Engineering. In third year, you choose which area you want to specialise in. This means you have time to explore different areas of engineering before you have to make a decision. A lot of people have a vague idea when they arrive, but completely change their minds in the by the end of second year! We also have to complete four weeks of industrial experience in the summer of first year, and another four in the summer of second year. This means you can get experience in different areas and see whether a particular field lives up to your expectations!

Engineering has quite a lot of contact time, split into two parts. Every week there are 11 lectures: two 50 minute lectures on Monday, Tuesday, Thursday and Friday, with a third lecture on Wednesday. There are also typically two or three 2-hour lab sessions each week, to put some aspects of the course into practice. Some of these labs are self-contained within the 2-hour session. Some you are required to write up in a lab report afterwards (don’t worry, they teach you how to write these in the first few weeks!) and some are part of longer projects, such as the Structural Design project where you design and build a truss structure, then test it until failure (!!).

Private study mostly comes in the form of examples papers – sheets of questions and maths problems relating to the course content being taught at the time. These are challenging, and it can take a little while to get used to the style of work, but you will soon realise that it's ok to ask questions and, if you’re really struggling, to miss a question out and ask your supervisor to explain it to you. Engineering supervisions last an hour each, in groups of two or three, a few times a week. The time is used to go through the examples papers, giving you the chance to go over things you didn’t really understand, either from the lecture notes or the examples papers themselves.

Engineering is hard work, but there is still plenty of time left in the week for extra-curricular activities, provided you manage your time well. I play in two orchestras, attend ballet classes (which I started in first year as a beginner), volunteer with Girlguiding and still have time for fairly regular film nights with my friends. Others play sports on the university teams and some row several times a week. There are a lot of hours in the day if you use them well! My main point of advice is to organise your time and to not leave your work until the last minute, it will lead to a much less stressful time!

Why I love Murray Edwards

When I started to think seriously about going to Cambridge, I was told not to immediately discount the modern or the female colleges. In fact, all female was quite appealing as I’m studying quite a male dominant subject. At Cambridge the male-female split in Engineering is approximately 70-30 which, although better than most universities in the UK, still isn’t great! I read through most of the blurbs in the prospectus and picked a couple to look at on open day. Murray Edwards was the first college I properly looked at on open day, I really liked it, so that was that!

During my time here so far, my love of the college has only increased. It may not be the prettiest or the grandest college, but there are so many things that set Murray Edwards apart from other colleges. For example, there aren’t many colleges where students are encouraged to walk on the grass and pick the flowers and home-grown vegetables. Some traditions hold throughout Cambridge though. Every week there is an optional formal dinner, to which you wear a gown (nothing is more fun than cycling to formal at another college whilst wearing your gown). We also have a ‘college family’ system. When you arrive as a first year, you are allocated a college mum who is a second year student also studying Engineering. Your college mum is a priceless resource as she’s already been through first year and can help you with subject or college queries, as you settle in in the first few weeks and throughout the year.

All the first years live in the same block, Pearl House, which is ensuite accommodation with a large kitchen for every 16 people, so you have the choice of whether to cook for yourself or to eat the cafeteria, which is known informally as Dome as, funnily enough, it’s in a dome! You’re also allocated a room near someone from the same subject where possible, which is really handy if you’re struggling with a particular question, or want someone to walk to supervisions with! An extra unique benefit of Murray Edwards is the Gateway Programme, which offers weekly sessions on study skills or careers talks to make the transition from school to university a little easier, and to help you get the most out of you time at university.