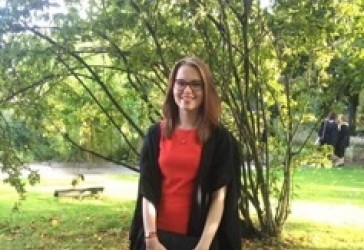 I live in a small town in Manchester and attended my local comprehensive high school and Sixth Form College. I studied Religious Studies, English Language and Sociology A-level and soon realised that Religious Studies was what I enjoyed the most. Applying to Cambridge only became a reality for me when my Religious Studies teacher nominated me to attend a Theology workshop day at Pembroke College. Even after this, I still felt hesitant about whether I was good enough to go to Cambridge. Despite this, with a tremendous amount of support from my college and family, I applied to St. Johns and was pooled to Murray Edwards.

Often when people ask which college I applied to my answer is met with surprise. At first I didn’t understand why but now I definitely do. Looking back at my application, I had an enormous amount of information about my course but didn’t know that much about colleges. I didn’t know what a hill college was and I definitely hadn’t heard of Murray Edwards. At first I was apprehensive about it being all-girls but it didn’t take long before I felt at home. Medwards is such a friendly, relaxing and supportive environment. There are so many contacts of support from college ‘mums’ to tutors to Directors of Studies. The college bursary has meant that I can put all of my attention on my course and enjoying my free time without worrying about my finances. If I had known about it at the time, I would 100% have applied here. The pooling system is great for this reason. They can see where students will get the most out of their time at Cambridge, even if they don’t know it themselves!

I love studying Theology, Religion, and Philosophy of Religion (TRPR)! There are so many disciplines involved in the course that you can really adapt the course to your own interests. In First year I was able to explore my interests in Anthropology, Philosophy, scriptural texts, world religions and even learn a scriptural language. In Second year I have furthered my study of scriptural texts and Philosophy and taken a coursework paper on religious themes in English Literature. The reading lists and essays seem daunting at first but when it’s something you’re passionate about, combined with the support you receive from faculty, they really don’t seem like that much of a chore. Being able to discuss my views in a one-on-one supervision makes all that hard work worthwhile. TRPR is a small subject compared to others, there are around fifty students per year, of which Medwards takes on two. Having relatively few people in lectures makes it very easy to get to know and recognise everyone in your year group.

In an average week I attend three one hour lectures and a one and a half hour seminar. I am set one or two essays per week, of roughly 1,500-2,500 words, and have the same amount of supervisions each week. Compared to some subjects, TRPR has less contact hours so my week is mainly made up of independent study in the form of preparing for my essays. This means that I can control my own work schedule and get to spend a lot of time exploring many of Cambridge’s libraries.

Although it seems like all we do is work, there is definitely free time to spend in pretty much any way you’d like. There is a society for almost everything and there are constantly different events occurring all throughout the week. The clubs are definitely an ‘interesting’ experience but you soon learn to love the cheesy playlists and themed nights. One of the social highlights for me is putting on my gown and attending Formal Hall. This year I gained the confidence to take up rowing which is a completely new experience for me (the same can be said for the 6am get-ups too). I also work every other week in Medwards’ student bar which puts on various events such as karaoke and comedy nights. Without a doubt, the biggest social events of the year occur during May Week which is definitely something not to be missed!