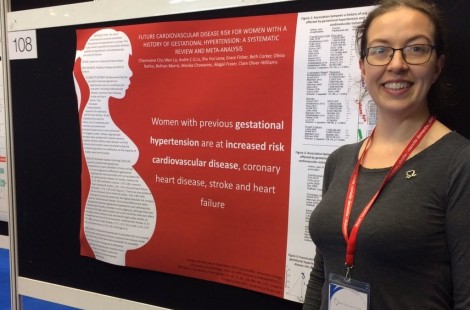 From the outside, my career looks straight forward. I started off with an undergraduate degree in Natural Science, worked briefly for the NHS and then I went into research. I studied for a Masters and a PhD, back-to-back, and then launched into a career in academia. That takes me up to where I am now, conducting research into heart attacks and stroke in women. This version of events is the easily digestible version. In reality it didn't run so smoothly.

When I started my undergraduate degree, I had no idea what I wanted to do, which is why I chose a degree in Natural Science. It gave me a chance to sample different branches of science before choosing the most interesting, which for me turned out to be psychology. I was fascinated by it, especially how language worked in the brain so I decided to research language processing. When I graduated, I applied for jobs in language research...and got nothing. I broadened my field to jobs in psychology research in general...and still got nothing. In the end, I got tired of the rejections and found a job in the NHS.

After a while, someone told me about a job in cancer research. It was outside my field of interest (or so I thought), but it used the skills I had and it paid well! A couple of months later, I was surprised to find myself starting a new job in breast cancer epidemiology. I was perhaps even more surprised to find that I loved it.

At some point I decided to go back to studying, but I don’t know when this dawned on me. There are no academics in my family (other than me, only my sister had been to university). I had little knowledge about what post-graduate qualifications entailed, or what a life in academia was like. Someone must have mentioned the possibility of a Masters and PhD to me and I ran blindly into it.

During my Masters in Epidemiology, I had to conduct a research project. To help students come up with an idea, there was a morning where we heard from researchers about projects and the data they had. After these talks, I approached one researcher and said I was interested in female hormones. Something clicked. She was interested in a similar field: pregnancy and what effect it had on a woman's chance of having a heart attack or stroke. We chatted and ideas came together. We chatted some more and we had a thesis project. We chatted again and within a few months I was not only doing a Masters’ thesis with her, but also applying to undertake a PhD too. My application was successful; a few years ago I was awarded my PhD. Since then, I've been very lucky to continue researching into women’s heart disease.

My career path can sound beautifully straight forward, like a clear path through a summer garden. In reality, it felt like stumbling blind through a forest. Paths are blocked, you don't know how to get where you want to go, and you often rely on luck. The trick, I found, is to enjoy the journey regardless. I'm reaching the end of my current job, which means I'll need to find something new soon. Although I'd love to stay in the area I am in now, that might not happen, but I'm sure that when I look back 10 years from now, that will all seem part of the plan.

Career Path: Pursuing a PhD in Physics - How Imposter Syndrome Almost Stopped Me