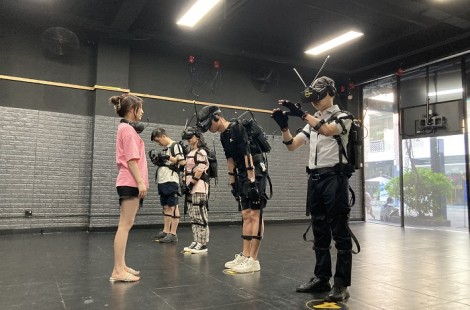 During my three-month internship in Yang Ming Quantum Tech, I worked as a device engineer and developed effective photovoltaic cell based on CsPbI3 quantum dot (QD) material. CsPbI3 is a type of lead halide with light absorption range that matches indoor LED light, which makes it suitable to build indoor photovoltaic cells. They can be applied on electronic devices that require low power supply, such as transistors and smart watches. It is a promising technology to provide green energy and solve the energy supply challenges in achieving internet of things (IoTs).

The main challenge of my research is the instability of CsPbI3 and to find an economic hole transporting layer material. CsPbI3 change phases easily under humid environments. The ligands that cover the surface of quantum dot can help stabilize the meta-stable phase in room temperature and prevent moist attack. However, the bulk ligands hinder electronic carriers transport between the quantum dots and a step of ligand exchange is necessary to achieve high efficiency. Hence, I spent two months in adjusting the amount and type of ligands. To do so, I read through scientific papers to understand the theories and adjusted the solvent of CsPbI3 QD, spin speed in spin coating, ligand exchange solution, ligand exchange time, cleaning solvent and the ration of solution in cleaning.

Spiro-OMeTAD is commonly used as the hole transporting layer (HTL) in lead halide photovoltaic cell, however, it is expensive and unstable. Therefore, it is not suitable for future industrialization. In search of a cheaper material, I tried PbS – EDT which is commonly used in PbS photovoltaic cell. It shows improved efficiency compared to the sample with no HTL. I achieved a 200% improvement in the efficiency at the end of the internship.

In addition to my individual research, I attended the collaboration meetings with Samsung to present our latest technologies and the progress of the research project. I learned a lot about the manufacturing and industrialization side of technology which should always be considered whenever I change the production condition during my research.

I was the only female researcher in the company, but I felt strongly supported by all my colleagues. There was a time my opinions on research direction were doubted by my supervisor and he did not approve my experiment plan. To convince my supervisor, I convinced the other colleagues first. My supervisor agreed to let me have a go at the experiment after I convinced three other researchers. The experiments turned out to be successful and solved the problem of QD layer being washed away by the next layer. From this experience, I learnt that it’s sometimes important to have faith in our own judgement even if it is challenged by the professionals.

This is also my first time living alone in a new city for three months. I tried riding a motorcycle for the first time, and I also took classes in one of the most professional dance studios called Wabble Street after work. In the first week, I could hardly catch up and I am proud to be picked to dance with the teacher after 4 weeks of practices […] Just like doing experiments and research, dancing requires patience and consistent hard work.

In conclusion, I have gained insights into the semiconductor industry in China and this is the first time I put my Solid State Physics knowledge together to make a workable device. Although the time was limited and there is still room for improvements for my photovoltaic cell, my final work was much appreciated by the CEO and he has offered for me to return in the future if possible.