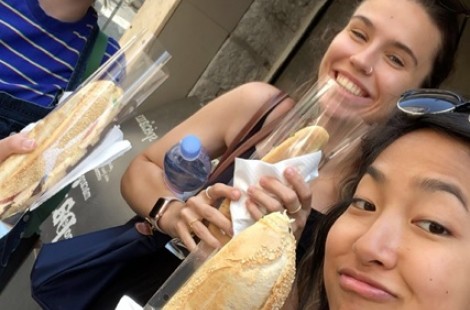 After having studied French at AS Level, I used my Gateway funding to spend four weeks learning French in Lyon. After doing some independent study of French, I realised I really wanted an immersive experience, and so chose the intensive course at the Institut de Langue et de Culture Françaises, part of the Université Catholique de Lyon.

We took a placement test to determine our level, and lessons began shortly after; while I was out of practice at conversational French, I quickly found myself improving as the lessons were taught entirely in French. The mix of nationalities on the course meant that my only shared language with some other students was French, which forced me to further develop my speaking skills over the month.

As well as learning more grammar, we had lessons focusing on more cultural themes –  for example, talking about French media, poetry, and photography. The course was intense, with many hours of lessons a week and further homework and study outside the classroom, but this really helped me develop my knowledge, and I was really happy that my hard work paid off. I passed the end of course assessment with ‘mention très bien', equivalent to passing with honours!

I loved living in the city, and quickly got into a routine of daily croissants and baguettes from the boulangerie around the corner from the university, which I now miss a lot! The heatwave weather made me grateful for the hours spent in the air conditioned classroom, but outside of lessons the university also organised excursions – including a day trip to Geneva, where we had a tour of the UN buildings, and later swam in Lake Geneva. We also went on a cruise tour of Lyon, and had a day trip to the Caverne du Pont-d’Arc, a facsimile of the famous cave paintings found in the Ardèche region – a trip which really tested my French skills as the tour was entirely in French.

I was also lucky enough to take advantage of the festival Les Nuits de Fourvière – a month long festival taking place on the hill behind my accommodation block in the ancient Roman amphitheatre in Vieux Lyon. Taking the funicular railway up to the concert, and experiencing such a historic atmosphere was truly magical, even though going to a concert by myself in a foreign country is not something I could ever have imagined myself doing.

When the month came to an end, I was so reluctant to leave Lyon – it was truly an unforgettable experience, and I made many incredible friends from all over the world. I’m extremely grateful to Gateway and the Rosemary Murray Fund, as without their support I wouldn’t have been able to go.