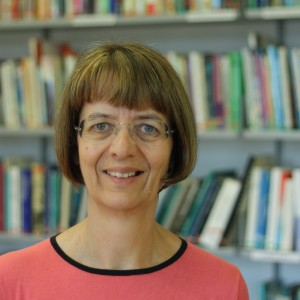 Murray Edwards offers an intellectually vibrant but warm and supportive community which brings out the best in our young women.

I studied French and German as an undergraduate at Girton College, Cambridge, but soon realised that my true passion was linguistics. After graduating I did a DPhil in Oxford with Professor Rebecca Posner on a key figure in the standardisation of the French language in the seventeenth century, Claude Favre de Vaugelas. Following a year as a Junior Research Fellow at St Hilda’s College, Oxford, I was appointed to an Assistant Lectureship in the French Department in 1983, and have been in Cambridge ever since. In 2005 I became Professor of French Philology and Linguistics and in 2009 I moved to the Department of Theoretical and Applied Linguistics. I have been a Fellow of Murray Edwards since 2001. I have been lucky enough to have had several periods as Visiting Professor in France and the USA, including Pajus Distinguished Visiting Professor, at the University of California, Berkeley in 2012.

Vaugelas and the Development of the French Language, London: MHRA, 1987

A History of the French Language through Texts, London: Routledge, 1996

Interpreting the History of French. A Festschrift for Peter Rickard on the occasion of his eightieth birthday, edited volume with Rodney Sampson, Amsterdam, New York: Rodopi, 2002.