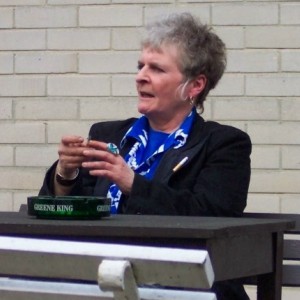 Maggi Hambling studied at the East Anglian School of Painting and Drawing from 1960 under Cedric Morris, then at Ipswich School of Art (1962–4), Camberwell (1964-7), and finally the Slade School of Art graduating in 1969.  In 1980, she became the first Artist in Residence at the National Gallery, London.

Hambling's style tends towards the expressionistic, with her portraits often completed during live sittings and others painted later, partly from memory.  In the 1980s, she turned more to painting landscapes, most especially of the area around Suffolk where she lives.  More recently her canvases have been more abstract, often including highlights of vivid colour, in particular her dramatic Seascapes of the North Sea.

In 1998 and in 2006, she collaborated with IAP Fine Art, London, to publish editions of silk-screen prints of her portraits of Jarman, Melly and Fry (launched by Stephen Fry and George Melly) to raise money for the Terrence Higgins Trust, helping people with HIV and AIDS.

In 2003 Hambling was commissioned to produce a sculpture to commemorate Benjamin Britten. The result was Scallop, a pair of oversized, 12 ft (3.7 m) high, steel scallop shells installed on Aldeburgh beach. Hambling describes the piece as a conversation with the sea.

Hambling was appointed Commander of the Order of the British Empire (CBE) in the 2010 New Year Honours.

She has painted the portraits of former Presidents, Dr Valerie Pearl and Mrs Anne Lonsdale.