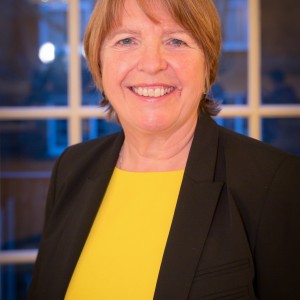 Dame Barbara Stocking was President of Murray Edwards College from July 2013 to September 2021.

In March 2015, Barbara was appointed Chair of the Independent Panel of Experts to assess WHO’s response in the Ebola outbreak. The report was published in July 2015.  It was widely praised and has resulted in major changes in WHO’s health emergencies planning and response.

Prior to taking up the post of President at Murray Edwards College, Barbara was Chief Executive of Oxfam from May 2001 until February 2013. During this time she led major humanitarian responses.  On campaigning, Barbara led Oxfam's work on Make Poverty History, and more recently their work on climate change and the current Grow campaign on food justice in a resource constrained world.  Barbara regularly spoke at major global meetings, eg. Davos, World Economic Forum, UN, etc.

Previously a member of the top management team of the National Health Service, in her eight years with the NHS Barbara worked as Regional Director for the South East of England, and then as the founding Director of the NHS Modernisation Agency.

Barbara is married and has two sons. She was awarded a CBE for health services in 2000 and a Dame Commander of the British Empire (DBE) for humanitarian services in the 2008.