Young Industrialist of the Year Award for budding Chemist 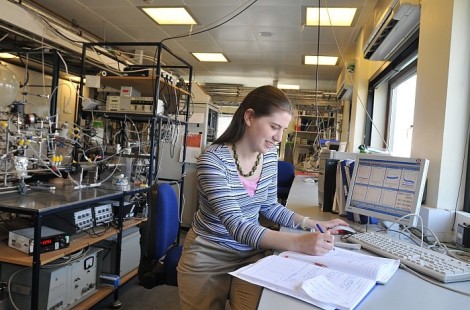 Young Industrialist of the Year, Angela Symington, working in a lab

Alumna and Chemist Angela Symington, has been appointed the Young Industrialist of the Year Award by the Royal Society of Chemistry.

The Young Industrialist of the Year Award recognises individuals who have created significant impact in the chemical industry, in the early stages of their careers. The accolade is part of the Industry and Technology Awards 2016.

The award was for her role in developing a framework to understand production chemistry threats relative to the design and delivery of major oil and gas projects.

Angela joined our College in 2001 and has an MSci in Natural Science and PhD in Atmospheric Chemistry. While at the College she tutored first year chemistry and, as MCR (the graduate union) President, oversaw the inaugural Graduate Research Symposium.  In 2008 she was awarded a Lowry Prize by the Chemistry Department.

Angela joined BP in 2009 and has worked for their central Upstream Engineering Centre on technology projects for the Gulf of Mexico, in North Sea Operations and Angola Major Projects. Outside her day job, she tutors and mentors kids and teenagers in inner city London. In 2013, she was awarded one of five global BP Tallow Chandlers Technologist Awards and the overall Special Candlestick Award for outstanding performance within BP and contribution to her local community.

You can find out more about Angela's career path and research by reading her entry in our She Talks Science blog.