What LGBT History Month means to me 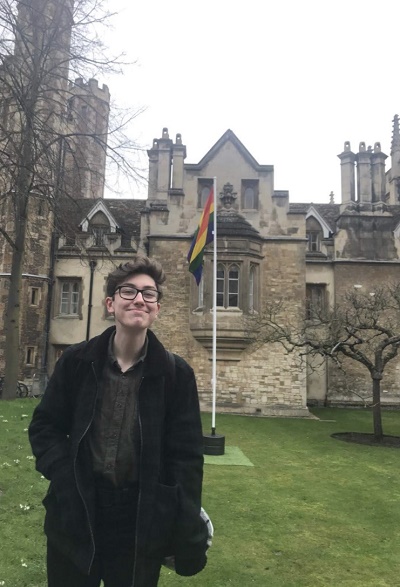 Can you tell us a little bit about yourself, Ell?

I'm Ell. I use they/he pronouns and I'm a second year English student here at Murray Edwards. I've been the LGBT+ Officer since November 2019 and my focus has been on raising awareness of trans experiences in College, and I've been surprised how much progress we've made in this short time.

Why do you think it's important to celebrate LGBT History Month?

For me, LGBT History Month is important in understanding how we, as a community, reached this point – as well as recognising that we have always had a community. As queer identities gain more awareness, I think some people can believe that this is a new concept, when in reality there has been a long gay tradition before us. Particularly in relation to the gay rights movement, I think it's important to recognise the work of activists, especially black trans women who led the movement for LGBT rights.

There is also an important element of commemoration and recognition of the past that should come with LGBT History Month – recognising the strides in progress we've been able to make and remembering those we've lost along the way, but I think there should also be a cause for celebration in realising we have a rich and diverse history behind us, and we can continue to make this progress.

How has Murray Edwards been celebrating LGBT History Month?

We had an LGBT Formal on 11 February to celebrate the month. Additionally, the College library has increased their selection of LGBT films, with a new film being highlighted on Twitter every day! The rainbow LGBT+ flag has been flown on the first and last days of the month as well.

We've also been highlighting the work that is going on around Cambridge, from CUSU LGBT+ and Encompass Network. From the many events and panels to the dozens of rainbow flags flying around Cambridge, I hope it represents a sense of solidarity and inclusivity that makes queer people feel welcome.

The theme for LGBT History Month in 2020 is "Poetry, Prose and Plays". What are some of your favourite poems, prose works and plays?

As an English student, one of the most exciting qualities of first year was discovering the gay canon; that there has been a history before me that can be traced, and authors have been influenced similarly to how I have. The most impactful piece of work in this regard has been E.M. Forster's Maurice, a queer Edwardian novel that tells the story of a Cambridge student struggling against a heteronormative society, and the joy he feels in being able to reclaim a happy, gay ending. This book has meant a lot to me since I read it in my first Michaelmas Term, and I've recently had the amazing opportunity to be able to direct it on stage at the Corpus Playroom during LGBT History Month – it's been surreal to see a queer work, which was also so relatable in first year, represented on stage in its original setting.

I am also a huge fan of Oscar Wilde. It's been exciting to discover publications like The Uncensored Picture of Dorian Gray, which display the more homoerotic qualities of his popular novel, and highlight how this text was used as evidence of his crime in his trial, convicting him of homosexuality. The influence of LGBT prose, and the impact of his trial, can be summarised in his speech within the court. The importance of 'the love that dare not speak its name', in Wilde's mind, was found in authors like Plato, Michelangelo and Shakespeare, being a quality that 'dictates and pervades great works of art'.

I think it's also important not only to recognise the more famous, white, cis gay authors – in shaping our canon, it's important to recognise and amplify other voices in history. With trans history, my favourites have been the recently collected Lou Sullivan diaries – recounting the life of an activist who was one of the most visible early gay trans men in a time where this dual identity did not seem possible. In my portfolio research, I've also been amazed by the work of Susan Stryker, particularly in her article, 'My Words to Victor Frankenstein Above the Village of Chamounix: Performing Transgender Rage'. This is an article, first delivered as a performance piece at a protest, in which she discusses the rage she feels as a trans woman in society, and how in relating to Shelley's Creature, it has helped her think how to channel this into a productive and effective form of protest. Her final line, 'May your rage inform your actions, and your actions transform you as you struggle to transform your world,' is still pertinent to this day, and I think it is a helpful quote to hold onto during this month.

What does being part of the LGBT community mean to you?

Crucially, I think being part of this community has created a sense of belonging. Realising there are people like me, who 'get it', and have always understood how I feel, has been incredibly reassuring and empowering. It's also inspiring to see the amount of change that can be made as a group, and the importance of continuing activism in everyday life. It's allowed me to meet some incredible like-minded people and realise that I'm not broken, but instead there is a group of people who have put my feelings into words. As Forster writes, "there has been, is, and always will be every conceivable type of person", and being part of this community has shown me the importance of that.