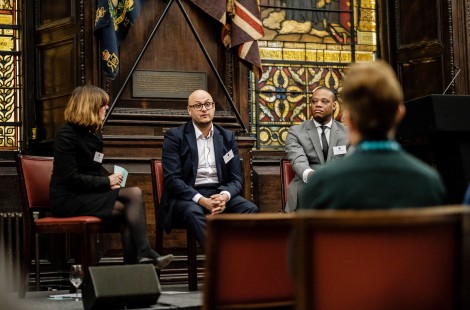 Involving 5,814 UK employees, this research sheds new light on the implications of the way people tend to think about the strengths, attributes and potential of men and women. This is not a simple issue. Few people are intentionally sexist. The research found that gender double standards are perpetuated by both men and women.

Almost three in four (74%) female employees believe their workplace culture makes it more challenging for women to advance their careers than men. 42% of men agree. While many studies have focused on women’s perceptions alone, this research also reveals men’s views and the gulf between the two, identifying where focus is needed to ensure equality of opportunity.

Today’s findings are released as part of Murray Edwards College’s Collaborating with Men programme. Delivered through research and workshops with large UK employers, the initiative enables employees across the genders to work together to solve cultural issues in their own workplace. It was launched after a 2014 survey of the all-female College’s alumnae reported workplace culture issues to be a greater barrier to career advancement than challenges relating to balancing work and family life.

The research found that the culture of UK workplaces is especially failing women of colour. Over half (56%) of women from a Black, Asian and minority ethnic or mixed race background say their workplace culture ‘often’ or ‘always’ presents career advancement challenges for women. This compares to 48% of white females.[1]

Dr Jill Armstrong, lead researcher and Murray Edwards College Bye-Fellow comments: “Women are well equipped to excel in leadership positions, but they’re not rising from middle management in the same proportions as men. Those involved in the study have been surprised by the gender gulf in perceptions about the effect of unintentionally gender biased thinking. It’s workplace culture that has to change if we are to create equality of opportunity. That has to be done in partnership with men.”

Women being judged more negatively for behaviours that male colleagues also exhibit is one of the key examples of gender bias for organisations to address, according to the research.

43% of female employees say they have directly experienced being judged more negatively than men for the same behaviour in the last 12 months.

Dr Jill Armstrong comments: “Both male and female employees acknowledge that in many workplaces men get away with behaving in ways that are not considered acceptable for women. Female anger is still particularly unpalatable - we saw that with the uproar about Serena Williams at the US Open. What is perceived as decisive and strong from men, can be caricatured as bossy or aggressive from a woman.”

More than half (53%) of women have seen these double standards affect other female colleagues in the last 12 months. Yet only 18% of men have noticed this happening to female colleagues over the same year, suggesting that while many men are aware women face greater career progression challenges, they rarely notice the ways in which this manifests.

Crucially, the researchers found these double standards are perpetuated by female as well as male bosses. Well over half of the employees surveyed (55% of men and 59% of women) report personally being treated differently because of their gender by a female boss.

Stereotypes lead to women losing out on challenging opportunities

According to the participants’ rankings, one of the other most important issues for UK employers to address is stereotypical views on men’s and women’s strengths. This is likely to lead to biased decisions when filling leadership positions.

Previous academic research[2] has established that traits commonly valued in potential leaders such as ambition, a single-minded commitment to work and risk-taking are frequently associated with men. Today’s study found these assumptions are perceived to affect women’s promotion into leadership positions.

According to two-thirds (64%) of female employees, stereotypical views about female traits, such as building good relationships, attention to detail and strong admin skills leads to them being perceived in their workplaces as good managers rather than good potential leaders. Only 29% of men believe this happens.

Kirsty Peacock, HR Director, Dentons UK & Middle East LLP, who has enrolled teams onto Collaborating with Men workshops comments: “I’ve tried many gender equality initiatives and this is the first one that’s started the conversation in a constructive way. Staff fill in a survey beforehand and the workshop begins by sharing the results. Being confronted by your own colleagues’ experiences is really powerful and the anonymity reduces the emotion that often comes with this subject.

“It’s moved the conversations we’re having away from blame and defensiveness towards a positive dialogue, with everyone creating the solutions together. We already have great gender equality policies and processes, but this is enabling us to think about our culture on a deeper level.”

Jason Ghaboos, researcher and Murray Edwards College Bye-Fellow comments: “Men can sometimes wonder whether it is their place to give a voice to these issues, and I have heard from male allies that their motives for being involved in gender issues are questioned; by both men and women. It needs to become more normal for men and women to talk about this.

“Gender inclusivity is not a ‘women’s issue’. To class it as such is unhelpful and masks the complexity of the issues, and the nuance required of interventions. Often solutions in the past have focussed on what women need to do to improve the situation. In truth, meaningful change can only occur when women and men work together to improve the workplace culture for all," added Ghaboos.

[1] Not all organisations which took part in the study collected data on ethnic background. These figures apply to 698 female employees, 127 of which were from a BAME or mixed race background.