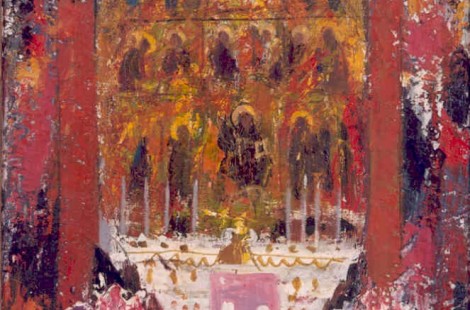 Ann Jones is a Curator at the Arts Council Collection.

In 1991 Ann was working with Hayward Touring on the South Bank in London and weekly commuting to Cambridge where her husband was a post doctorate Fellow at New Hall. They were invited to a fundraising dinner where the Development Director was asking for ideas of how people might donate funds to the College.  Ann, with her background in art, had been thinking that it was strange that all the paintings in the dining hall were by men, when it was a college for women. Whilst she did not know any potential donors, she knew artists and suggested to the then-President, Dr Valerie Pearl, that the College should approach women artists asking them to loan or donate works.  Critically, works would not be sold to raise funds, but would start a significant collection of art by women, to inspire people living and working in the College.

Dr Pearl’s previous roles at University College London had brought her into contact with artists at the Slade and she was very attracted to the idea.   Ann suggested a number of women artists whom she thought would be interested in showing their work in a college for women, particularly against the background of New Hall’s magnificent modernist building. Their art would join six works of the renowned Mary Kelly’s Extase, created in 1985/86 when she was living in the College as Artist Fellow of New Hall and Kettle’s Yard.

Donations by artists were followed by gifts and bequests by alumnae and friends of the college.  Jean Chamberlin, wife of Peter Chamberlin, the leading architect on the New Hall project, gave a 1963 Anne Redpath oil painting, Altar in Pigna.

The intent that the artworks were gifted to create a vibrant environment which would inspire women students has certainly become the case.

Quotes from students include:

‘It gives students, alumnae and staff a ‘belonging’, a sense of pride, and a talking point around their workplace and establishes a place of ‘prominence to be

‘It is the physical manifestation of the College’s identity - brave, experimental, warm, for women.’

Being in a College, the art can become a talking point between artists and academics. Ann remembers an animated discussion over dinner between Dame Paula Rego and a College Fellow whose subject was Portuguese history, regarding her painting, Ines de Castro, which was painted to mark the 60th anniversary of the founding of the College in 2014.

Ann’s experience across many art collections and exhibitions leads her to wonder in many of them, what the gender balance is. Whilst 2018 marked a century since women were given the vote and was also the year of the MeToo movement, the New Hall Collection with its over 550 works by women is still considered by Ann to be “unique”.