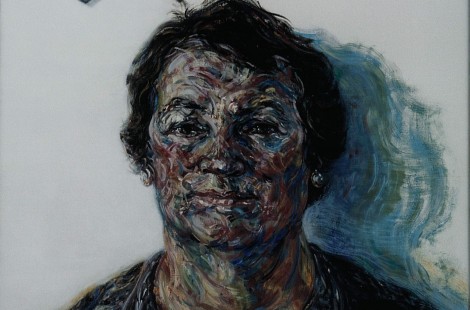 Anne Lonsdale, President from 1996 to 2008, takes a long view of the Collection

Anne Lonsdale became President of New Hall, Cambridge in 1996, twelve years after the founding of the New Hall Art Collection by her predecessor, Dr Valerie Pearl.  Pictures were hung throughout the College and Anne recounts, with delight, the amazement of Tom Hoving, then Director of the Metropolitan Museum in New York, who exclaimed as he walked around, ’My lighting people would go crazy! It breaks all the rules, but it is marvellous, it works, it is a most extraordinary experience. Students even get art on the way to the laundromat!’

For Anne, in this case, ‘breaking all the rules’ is important. ’The architecture and the art of this College is so different. It is such a contrast to traditional colleges where portraits of dead men hang on the walls, whereas we have works by living, female artists. It means there are no stereotypes here. As a woman, in this College, you can be any body, you are free to be yourself.’

An intriguing and perhaps unexpected view from someone who, with her background in academic administration (and a later role as Chairman of the Syndics of the Fitzwilliam Museum), set clear parameters for the content, care and maintenance of the Collection, which began to prepare  the way for the 2018 award of Accreditation by the Arts Council.

By 1996 the Collection had grown to a point where there were going to be ‘no more walls to hang all the pictures‘, so Anne set up an external Art Committee to define the terms of reference for accepting works which would be part of the main Collection and to make recommendations for their display, care and, essentially, storage requirements. Works not included in the main Collection, are held in the Student Collection which enables current students to choose paintings to hang in their own rooms.

Artworks come to the Collection on loan, are donated by the artists themselves or are presented by alumnae or friends of the College. In 1996 artists could choose where their works might hang.  One of Anne’s favourites is Madonna Cascade by Rose Garrard, 1982, which is concerned with role models that are imposed on women. The painting itself represents a self-portrait of the Dutch painter Judith Leyster (1609-60).  The frame, made in white plaster by Rose Garrard, is composed of figures of the Madonna. Having demurely framed half of the picture they swoop in a joyous cascade to the floor. Rose chose to hang her picture at the end of one of the corridors which run either side of the central Fountain Court, because there were water stains on the white brick. The painting has since been moved to protect it from damp.

Conservation was, and is, a major concern for the Collection, as is good storage when wall space becomes limited or is in use for an exhibition. A collection of artworks of the quality of those in Murray Edwards needs careful management. During Anne’s Presidency, a generous donation from Horace Barlow established the Barlow Fund for conservation. Ongoing funding to maintain the Collection on a permanent basis will always be essential.

Another of Anne’s eclectic selection of favourite works is the Dung Beetles, by Wendy Taylor, generously donated by the artist in 2000. Three, almost metre-long, black beetles, made of bronze, are ‘perfectly displayed’ at the base of the circular staircase in the north corner of the Dome, the College dining hall.  Seen from above they are highly detailed, anatomically correct and surprisingly delicate given their size.

The Dome, with 16 large canvases set in the four arms of the Maltese cross which is its ground plan, is impressive.  One picture, Gulf Women Prepare for War is a Maggi Hambling oil painting from 1986. Black images of shrouded women against a face powder pink desert, with the central figure holding a machine gun, reference Manet’s painting of the execution of Emperor Maximilian of Mexico, a subject Hambling studied during her year as the National Gallery’s first Artist-in-Residence, (1980-81). Her painting is based on a photograph from The Times during the Iran – Iraq war.

Maggi Hambling has been a staunch supporter of the Collection from the beginning - despite not believing that ‘women’ artists should be differentiated from ‘artists’.  Four of her pieces are in the Collection, including a portrait of Anne in oils and a charcoal drawing of Valerie Pearl, Anne’s predecessor, the Collection’s founder.  On Anne’s retirement the New Hall Society presented her with Wave by Maggi Hambling. On the back Maggi had written ’A Grand Wave for Anne - and love from me too’.