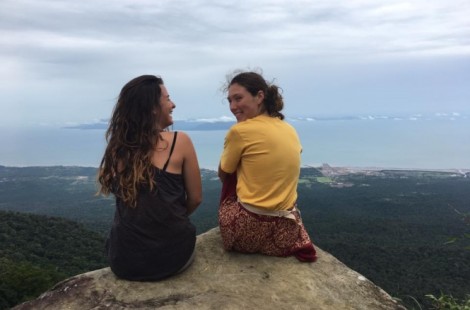 The Gateway Challenges and Rosemary Murray fund allowed me to spend 5 weeks of my summer travelling around South-East Asia with a group of four friends. We left at the end of June, which meant that after a very busy Cambridge year, we barely had time to pack, unpack and pack again before we were boarding a plane to Bangkok, Thailand.

Arriving in Bangkok was both exciting and overwhelming. With a bustling population, daily downpours and unmoving traffic, the atmosphere was vastly different to the last few months we’d spent in Cambridge. The feeling of foreignness was enhanced even more at the sight of the gold topped ancient temples and grand palace. Despite looking like wonders from an ancient time, they were still very much in daily use. Whilst we were there we saw processions of hundreds of ordinary citizens, dressed in mourning black as they walked to the Wat Fai to pay their respects to the late king. It was the first of many culture shocks.

We did not stay long in Bangkok and instead decided to find fresher air by taking a 9 hour bus across the border to Battambang, the second largest city in Cambodia.  Said to boast the greenest rice paddies, it was a welcome break after the bustle of the city. The highlight of Battambang was the day we spent touring the countryside- seeing 100,000 fruit bats leaving a cave at sunset, as well as riding a bamboo train.

From Battambang we took a boat down the river to lake Tonle Sap and Siem Reap. The journey was far more pleasant than the bus ride and we enjoyed sitting on the roof of the boat, watching Cambodian life go by. The banks of the river were home to many floating villages where the residents were completely isolated except for by boat. Our own boat appeared to act as a delivery service for many of the villagers- they would paddle out in their kayaks to retrieve everything from rice to cabbages.

In Siem Reap, our main destination was Angkor Wat. As one of the seventh wonders of the world, it was truly the highlight of our trip. We decided to travel around the site by bicycle, since we were all pretty used to cycling around in Cambridge and with bike rental at $1 a day, it seemed too good an offer to refuse. That said, we hadn’t counted on the weather. After an idyllic day touring the beautiful ancient temples in the sunshine, we hit a tropical storm on the way home. It was impossible to see, let alone cycle, and by the time we got home we were soaked through. My flimsy shower-proof coat did not appear to do very well under the full force of the Cambodian rainy season, so for the rest of the trip, I abandoned it, in favour of the far less fashionable plastic ponchos favoured by the locals.

From Siem Reap, we travelled on through Cambodia, stopping for 5 days on the idyllic rural island beaches of Koh Rong and then to the national park of Kep and riverside town Kampot. From Kampot we moved to the Capital, Phnom Penh. Often disliked by travellers due to its urban feel and reputation for crime, we were pleasantly surprised by Phnom Penh. After the quiet of the Cambodian countryside it was fun to be back in a bustling city and we enjoyed this to the full by working in a hostel bar for a week. This was a great way to meet other travellers and talk to the locals who also worked there. Working as a base also gave us plenty of time to explore the city, which came with a very sobering past. Before my trip I had been largely unaware of Cambodia’s turbulent history and the civil war and genocide that ensued in the late 1970s. However, visiting the S21 museum and Choeng Ek killing fields left a strong impression and I was left with a sense of amazement at the remarkable the pace at which the country has been able to move forward following so many years of violence.

Cambodia is truly a remarkable place and my experience there has left me incredibly grateful to Gateway and Murray Edwards for the opportunity.