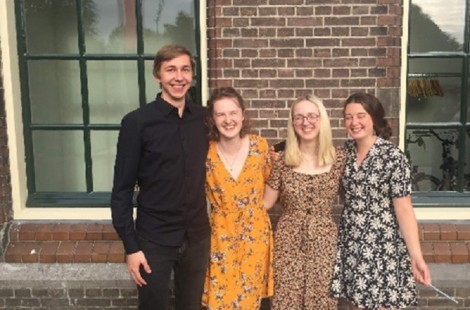 After a week staying with friends in Germany, on 28 July I was dropped off at a large imposing building in the Netherlands, armed with my viola and not knowing who else was going to be on this music course I found on the internet one evening in January. A week later I would leave full of emotion after one of the most rewarding, inspiring and fun weeks of my life, already looking forward to booking onto next year’s course.

European Youth Music Week (EYMW) was started after the Second World War as the Anglo-German Music week in order to try and repair relationships and start friendships between the two warring nations. About 15 years ago it expanded to encompass people from all over Europe, and this year there were young people in the orchestra of 16 different nationalities.

Three years ago, the leaders of the course started to think about how the course could be updated to meet some of the new challenges faced in the 21st Century, and so they decided to create a Refugee Choir course to be run in parallel with the orchestral course. 2019 was the second year with the choir, with a group of about 30 young people who lived in Germany but were originally from many different countries such as Syria and the Ivory Coast. This group of about 100 young people was made up of some of the friendliest and most joyful people I have ever met, and I certainly experienced the course’s founding principle of “promoting international friendship”.

We spent the days in rehearsals from 9.15am until 10pm, so it was pretty intense! This time was divided between full orchestra, different chamber orchestras, and a slot in which to form chamber music ensembles. The rehearsals were really good fun (although I ached a lot in strange places from playing too much viola!).  Although the quality of music making was extremely high, and I certainly improved my technique and musicianship, the atmosphere was inclusive, and everyone was encouraged and made to feel good whatever their level. One of the highlights for me was playing in a string quartet, as we managed to play really well together despite not having much rehearsal time.

However what made the week so great was all of the people I met: I made good friends with a group from the orchestra from lots of different countries, and it was great sharing ideas and experiences of life in our countries, as well as lots of cultural references like tea and Horrible Histories! Some of the most inspiring conversations I had though were with the people from the choir – speaking in our mutual second language of German, I heard about their experience of moving to a new country and all of the exciting things they are doing with their lives now, from hairdressing courses to gigs at music festivals. Speaking to them made me really appreciate the opportunities the country I live in gives me.

At the end of the week, we had two concerts: one with chamber music, and one with group music culminating with a joint newly commissioned work for choir and orchestra. The concerts were some of the most eclectic I have been involved in, with music ranging from improvised jazz to a trombone quartet, and at the end the orchestra turned into a choir to do a Lion King Medley. Even better though was the after-concert party with dancing to Syrian music, lots of games, and a big awards ceremony.

I grew a lot through doing the course and I developed and used lots of skills which I don’t always get to practise at university – my viola playing, my German, and most importantly my ability to speak to and listen to all sorts of different people. I’m so glad I had the opportunity to go, and if I’m able to, I’d love to attend again next year!