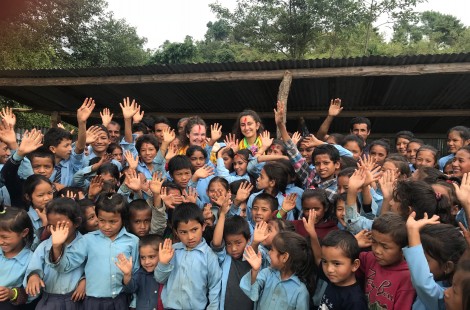 In short, my trip to Nepal was certainly an unfamiliar but incredible experience, comprising predominantly of Dal Bhat (plain rice and lentils), hikes up vertical ‘hills’ and through paddy fields, cultural enrichment from temple visits and numerous festivals and most importantly of education that myself and Helen gave to children deeply affected by the earthquake that struck Nepal in 2015.

However, the five weeks for which I was in Nepal was more than just trying local food, learning about Nepalese culture and teaching English to less advantaged children. It was 5 weeks of understanding the lives of those living in excluded rural villages, cut off from any form of western civilisation and modern technology. From living amongst the local villagers, with the most welcoming host family and being surrounded by the children from Shree Naulingeshwory Basic School all day, I was exposed to a completely new way of life, one that had few demands and relied solely on subsistence farming and the surrounding nature.

Before even leaving England, I certainly encountered a challenging situation... I took off without any of my belongings for the next 5 weeks as there was a crash on the way to the airport, causing me to miss check in. Nevertheless, I was met by the head (Jimmy) of the NGO who we were working for, HELP (Helambu Education and Livelihood Partnership), as soon as we landed to buy some basics necessities at a Nepalese superstore- an experience in itself! In total, there were 9 volunteers at the time I went, and we were either in pairs or threes when in the villages, spread across the Helambu and Panch Pokhari regions of Nepal.

After having stayed in Bhouda (an area of Kathmandu) for a night, where we visited a beautiful 36m tall stupa (temple) and had our first meal together with Jimmy, we travelled to Melamchi via jeep. This was a VERY long journey devoid of any smooth or tarmacked road, and with it being the monsoon season there was a bus stuck in a landslide so we had to get out and walk a bit of the way. Melamchi was a lovely place to spend our last night and we met other volunteers who were already 2 weeks into their placement and so gave us some advice on effective teaching methods in the schools and what living conditions to expect. (One volunteer actually ended up getting bitten by a snake a week after that and had to go down to Kathmandu hospital for a week)…

Early in the morning of August 19th, Helen and I were first to travel to our village. The night before we were informed that the father of the head teacher, who we were supposed to be staying with, had died, and since they were Hindu there would be a two-week fast so we moved villages much further away than planned. It was allegedly an hours Jeep ride and a two hour hike with one of the HELP staff, but 8 hours later we eventually arrived. We were introduced to our host family, Didi, Di, Saramila and Bijan, who owned a ‘hotel’ and one of the two ‘shops’ in the village (see pictures). We helped cook with Didi despite the lack of any ingredients she could access and the absence of an oven, fridge and electricity. We bought coloured paper, pens, playing cards, a kite and other toys to play with our sister and brother, and spent a lots of time with goats, monkeys and leeches.. Some evenings we would play cards with local villages, dance with the family or drink beer and chat with Di- who could speak more English than the English teacher… (we now also know 100 Nepali words after having to learn quickly to help converse with the locals).

The biggest challenge (aside from a few questionable ailments encountered) was by far the school, which consisted of tree trunks and corrugated iron in the middle of a terraced corn field, and therefore the lack of walls made it hard for the children to hear what we were saying when other classes were chanting and singing. The language barrier meant that a lot of the teaching relied on repetition of what we were saying and copying from the broken whiteboard that kept falling off the branches from which they were hung, rather than the children actually understanding what they were being taught. We hoped that the English teacher would translate some sentences but he had VERY minimal English language skills. Eventually we used drawings and actions to portray what we were teaching them, and focused on pronunciation. We introduced audience participation, clapping and stickers to engage the students, and bought in a blow-up globe to teach them about the wider world outside of, not even Nepal but, their own village. Very few children knew what England was, and only really knew of China in terms of other countries, with few of them ever even having gone to the capital of Nepal, Kathmandu. It was also challenging to teach the nursery class when none of them had any equipment to learn with; many used the tiniest bit of lead that had fallen out of the actual pencil, and only had one scrap of dirty paper to write on. It was unbelievable to see how the children still turned up for school every day with a smile on their face, in the same clothes they had been wearing for 4 weeks straight, wanting to learn.

The last week of the trip, assisted by Gateway funding, entailed visiting the sights of Kathmandu, back in a place with running water, restaurants and continuous electricity. Despite this, the roads were still manic, cables and wires were hanging in stacks over the road and poverty was still very much in surrounding view. We had a debrief over dinner with the other volunteers, shared stories and contributed improvements for the school and ideas to help the teachers educate their students more effectively. The last few days consisted of visiting temples populated by monkeys, visiting Bhaktapur (an ancient city in the Kathmandu valley where the King once lived, however where his palace and surrounding temples had been severely destroyed by the devastating 2015 earthquake), accidently dining with Nepali politicians, browsing the markets and scouting out places for breakfast and dinner.