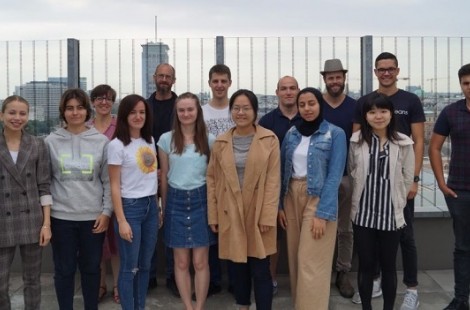 In August 2019, I spent four weeks on a German language course at the University of Vienna, partly funded by Gateway Challenges funding and a Rosemary Murray Travel Exhibition.

Having never studied German before, I thought spending time in a German-speaking country would be a good way to improve my knowledge quickly, as well as to learn about Austrian culture. The university provided me with accommodation in the 8th district. This was a relaxed area with shops and cafes and was close to the historic city centre to make exploring easy.

The course involved three hours of language lessons each morning, in classes of between 10 and 15 people. We worked on our listening, reading, writing and speaking covering a variety of different topics including work, clothing and holidays. I learnt plenty of new vocabulary and seeing words I knew everywhere around the city made them far easier to remember. The lessons were taught entirely in German, which was a bit of a shock at first, but gradually I found I could understand more of what the teachers were saying. The students had to communicate in German as well, which was difficult but quite entertaining and definitely good practice!

During the afternoons we were free to explore the city. Vienna is fairly small, so it was very easy to get around either on foot or by public transport. I visited the Prater park and the Danube island, where I went for a paddle in the river. The university also organised plenty of extra classes and excursions. I went to a German choir and even tried Viennese waltzing, which is harder than it looks because it is so fast! I went on some of the optional guided tours, also in German, of the old town and the City Hall, together with a walking trip in the Vienna woods. I visited the houses of various composers that lived in Vienna, as well as lots of museums, art galleries and an outdoor film festival. Being in Austria, I of course had to try schnitzel, apple strudel and sachertorte at a Viennese coffee house!

I had an amazing time in Vienna and met people from so many different countries. I also passed the level A1 exam at the end of the course. I am definitely going to continue learning German and would love to go back to Vienna one day soon.