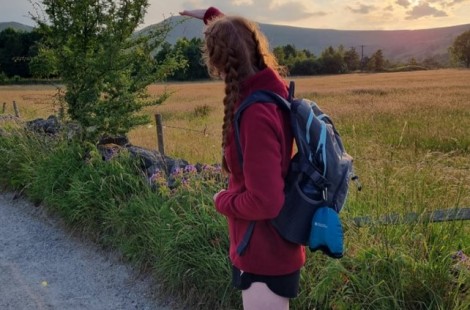 This year, thanks to the help of Gateway Challenges Funding, I was able to spend two nights and three days in the Peak District. It was one of the most beneficial experiences I’ve had to date since it allowed me to push myself in several ways. The first, and probably the least impressive sounding, was it forced me to drive on the motorway for the first time. Now this seems like a rather insignificant feat, but it was the one thing I was most worried about, and since making this journey down to the Peak District, it has given me much more confidence when driving.

The first day in the Peaks was spent doing an 11km hike which took us up Mam Tor which is a 517m hill near Castleton. Its name means “Mother Hill”, so called because frequent landslips have produced a multitude of smaller hills beneath it. We then walked along the ridge of Mam Tor to Lose Hill. This hike not only was a physical challenge, since I hadn’t done such long walks in a long time, but it refreshed my rusty map reading skills which hadn’t been used since I was 15.

The following day involved a 12km Kinder Scout walk via the Red Brook Scramble. The scrambling was strenuous, but once we reached the top, the view was incredibly rewarding (at least until the clouds/fog obscured it!). Later that day, we went and did some indoor bouldering and rock climbing since the weather wasn’t good enough for outdoor bouldering. This allowed me to improve my belaying skills since it had been a while since I had done any roped climbing.

On the last day, we finally had a bit of nice weather and managed to fit in an hour and a half of outdoor bouldering at Stanage Edge, one of the best outdoor boulder spots in the Peak District. Following that was a 10km hike around the Lady Bower Reservoir. For the creation of this reservoir, the flooding of Derwent Village had to take place and in 2018 when the hot, dry summer descended on the English Midlands, parts of the village were revealed.