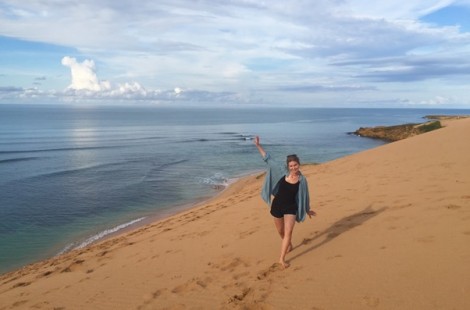 With the help of the gateway travel fund I was able to travel to Colombia for a month-long solo backpacking trip this summer. My main goal was to practice Spanish after taking a term of classes. Medellín was my starting and ending point. My plan was to focus on the north of the country so I had more of a chance to get to know the places I went to and get off the tourist trail to practice Spanish.

I absolutely loved Medellín and it was difficult to bring myself to leave after a week. Tourism only sprung up here about six years ago as it was too dangerous under Escobar. I found there was a lot of curiosity with travellers; locals struck up conversations and helped out with anything. I learned a lot about the recent politics of the city on free walking tours of the centre and surrounding barrios, and chatting to locals. What struck me most was the pride in the city and its transformation from the most dangerous city in the world during ‘La Violencia’.

From Medellín I travelled south to the coffee region. In Salento I got to visit some coffee farms and surrounding towns. I did my first solo hike in the Cocora valley, which is famous for the world’s tallest palm trees.

I then flew north to Cartageña, a Caribbean city with a beautiful old colonial town. I met a few Irish travellers who were also interested in getting off the tourist trail and we made our way to Rincón del Mar, a small Caribbean town with stretches of white sand beaches and jungle. We did some snorkelling in coral reefs and went around the surrounding islands by boat.

From Rincón we continued to Minca – an area off the coast with waterfalls and stunning sunset views! I visited some sustainability projects in the area and spoke to cocoa and honey farmers about their recent projects. I continued on the coast with some friends and eventually made it to Punta Gallinas, the most northern point of the continent bordering Venezuela. The road was rough (we broke down a few times and had to get five means of transport through the desert and sea) but getting there was definitely worth it. The landscapes of desert on sea were surreal, and we caught some amazing sunsets and sunrises. The best bit was swimming with fluorescent plankton while stargazing with a clear view of the Milky Way above! I was interested in learning about the native ethnic community –  the Wayuu of the Guajira peninsula – which are the most important remaining indigenous group in Colombia. It was surprising to see how they welcomed large numbers of Venezuelan refugees despite being one of the poorest regions of Colombia.

I carried on a bit longer on the coast and stayed in Palomino and Costeño beach to catch up with friends before going to Tayrona National Park for two days of hiking. Sleeping on a hammock on the beach and getting up at sunrise to hike through the jungle with no one around was one of the highlights of my trip. I then made my way back town to Medellín by bus to fly back home.

I’m so grateful to have been able to do this trip with the help of the gateway programme and its generous donors! I’ve noticed that I’ve progressed a lot with my Spanish and am looking forward to carrying on with more advanced classes next year. I’ve also had the opportunity to learn about the complicated politics of the country and region by hearing what locals have to say about the situation. Traveling alone was a great way to get some freedom and space before the start of a hectic term, and has also pushed my confidence with people and new situations. I hope to return to Colombia and possibly travel up Central America and Mexico in the future.