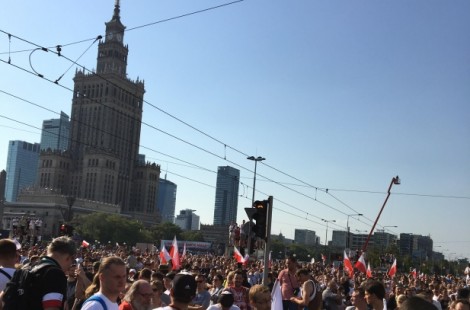 I always knew that, if I were to ever use Gateway funding for a summer experience, it had to be for a research trip to Warsaw – the city is my favourite place in the world, and its bountiful, if heartbreaking, history is too compelling to ignore. But my impetus was even more personal than this: I wanted to go to trace a family who had really been a part of my life for seven years; wanted to find out more about the individuals behind a story that many of us are familiar with. The account of the experiences of Władysław Szpilman, known from the award-winning film The Pianist (2002), has inspired me in so much; giving me motivation and enthusiasm when I think I have none - whilst his living relatives are now friends who I have visited in the last few years. It introduced me to histories, cultures and music I may never have known elsewhere; prompted me to fall in love with a city I otherwise might never have visited; and helped me reconnect to my own family’s Polish origins. Gateway was, therefore, a chance not only to immerse myself in the history of a place so dear to my heart, but also to give back, in the small way that I am able, to people who I owe so much to and can never thank. It was an experience in the making since 2010, when I first watched the film that, really, changed my life.

I travelled to Warsaw at the end of July with the intention of trying to complete some research on the Szpilman family – though I am by no means competent in Polish, I had managed to arrange (with the help of Google Translate) meetings with a few individuals who had documents on the family they were willing to show me. I decided to travel at a time in Warsaw’s calendar which was already brimming with significance: the 1st August, which fell near the end of my trip, was the 73rd anniversary of the Warsaw Uprising; an event the entirety of Warsaw’s population takes great pride in. The celebrations that week were nothing short of phenomenal; the culmination being a moment at which the whole city stands still, at precisely 5pm on the 1st. Whilst my research was, at times, heartbreaking to explore – considering the subjects of it (Szpilman’s family) all perished in the Holocaust, meaning that the records I was examining are all that is left of them – it was soul-affirming to explore this within a city whose spirit has risen from the dead time and time again.

It was in the south of Poland, however, that my efforts were really fruitful: I flew to Sosnowiec, the place where the Szpilman family originated, and was shown birth records of the family, along with school reports and the house and schools in which the family spent their time. Despite only being there for a day (contrary to what LOT Polish airlines seemed to desire, with its cancellations and delays for my return flight to Warsaw…), the wander around Sosnowiec taught me more about the family than I had learnt before; whilst also introducing me to another part of Poland (though I must say Warsaw is still my favourite!).

Though chasing up records was not always successful, I spent a glorious week exploring the beautiful city of Warsaw on my own: I was worried that I would find it lonely or terrifying on my own, but learnt an aptitude for self-discovery I did not think I had. The two times I had previously visited the city with my parents were lovely, enabling me not only to realise how much I adored the place but also to acquire a mental map of the streets – but travelling there on my own was like accessing another world; one of independence, and encouragement and a feeling of contentedness deep within me. Though I missed conversations as I walked the clean thoroughfares of the neighbourhoods; seeing the sights, attractions and museums alone was the most liberating feeling – I would strongly recommend self-travel, if not for anything else, then for the things you learn about yourself as you go.

Despite my all-consuming anguish at the thought of spending six days in a country totally on my own, I was determined to complete the experience; I cried in Luton airport; on the plane; in the hotel – and yet, by the end, was crying because I was leaving. To be in a city I loved so much, endeavouring to research such hard-hitting yet utterly significant topics for a family who had inspired me in so many ways, is an experience I am glad I stuck with. It mattered so much to me – and I am so thankful that I had the opportunity to complete it.