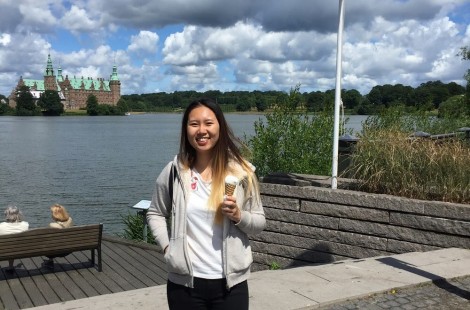 At the end of June, 2018, I travelled to Copenhagen, Denmark, and I am grateful for the Gateway Fund and Rosemary Murray Travel Exhibition for supporting this cultural trip.

When taking my first transportation to get to my accommodation, I quickly noticed the first difference in culture. There was no ticket gantry to ensure that passengers have made their payment for the transport. This is in contrast to other cities, such as London and my home country, Singapore, where rules are more strictly enforced.

The city was tourist friendly as most Danish can speak English and English directions were widely available. Whilst dining at a restaurant, I was lucky to be able to try the Danish traditional smørrebrød while the waiter patiently introduced the dish.

What struck me the most was the number of people cycling in Copenhagen. The city had been well organised to accommodate such a lifestyle. Bicycle racks were widely available and there was a cycling track, in between the road and the pavement, across the entire city. I found it an admirable effort of the city in cutting down carbon emissions and promoting a healthier lifestyle.

In addition to being a very modernised city, Copenhagen has retained much of its historical sites. I visited many cultural heritage sites such as the Christiansborg Palace and Amalienborg Palace. These are still used for state events. In fact, the current monarch still resides in Amelienborg Palace. The palaces were also museums of the Danish history and it is rather fascinating to see how the role of the monarchy has progressed throughout the past centuries to become more ceremonial and performative in the present context.

During the trip, I also took day trips to Frederiksborg Castle and Kronborg Castle. The Frederiksborg Castle was home to a vast collection of portraits, historical paintings and furniture which allowed me to get a good understanding of the lives of the royalty from the late Middle Ages to the present. Kronborg Castle was the setting of the Shakespearean play, Hamlet and I was lucky enough to catch an act of the play at the castle. Through following the play in different settings in the castle, I was able to appreciate the well-decorated rooms in the castle at the same time.

Overall, I really enjoyed the welcoming atmosphere in Denmark as the Danish were very friendly and took the initiative to offer help when I could not find my way. The less dense population was also a stark contrast to my home country and allowed me to better enjoy the natural beauty of Denmark.