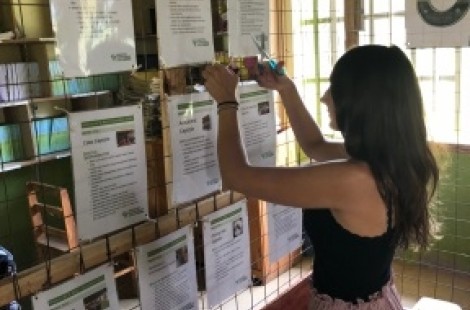 What did I do with the funding?

This summer, I spent 10 weeks volunteering at St Mary’s Mukhuma secondary school in Bungoma county, Kenya. I volunteered on behalf of a charity called Education Partnerships Africa (EPAfrica), who have a society at Cambridge University.

Before the trip, I had to fundraise over £2,000. This covered the cost of my flights, accommodation, some central charity costs and a compulsory £900 ‘investment fund’ for the secondary school that I worked in. The ‘Gateway Challenges’ funding contributed to this fundraising that I had to complete and without it, I doubt I would have been able to go on this trip!

Whilst in Kenya, I spent my first week in Kakamega, where the central charity trained the ‘project workers’ before starting work in our secondary schools. During the following 9 weeks at St Mary’s, I worked with 2 project partners in order to carry out a range of projects. As we each had to fundraise £900, we had a collective £2,700 to invest into the school. In addition to this, we received extra funding from several sources throughout the duration of the trip, such as central charity grants. This increased our total school investment pot to just over £5,000.

When we first arrived in the school, we spent 1-2 weeks getting to know the staff/students and identifying areas that needed improvement. Once we had decided this, we used our funds to project manage a range of school projects. Our biggest achievements include: installing a new laboratory in the school, creating a library, producing ‘tippy tap’ handwashing stations and turning a dilapidated classroom into a ‘projector room’.

Before we arrived at the school, the laboratory was non-existent. The students used unbalanced, rotting wooden tables to carry out experiments and had no gas/sinks. We built robust concrete tables, installed a gas system and installed a water system with sinks. In addition, we re-organised the laboratory preparation room and all the equipment. Before we arrived, the school had a lot of equipment but most of it was inaccessible or stored in precarious places.

Before we arrived, the school ‘library’ consisted of cardboard boxes full of books, a single table and two cupboards in an otherwise very empty classroom. We utilised some of the schools existing tables and bought benches, to create a functional study area in the library. In addition, we put shelving up for the books and created a lockable cage surrounding the books, to improve organisation and reduce book theft in the school, which was a big problem.

Previously, the school had no handwashing facilities. The ‘tippy taps’ are handwashing stations that are very inexpensive to make and yet effective – there is a lever that can be pressed with your foot and it causes a jerry can full of water to tip and pour out water, that can be used to wash hands.

We received some additional, central charity funding to convert an unused and dilapidated classroom into a projector room. To do this, we re-concreted the floor, painted the walls of the room and created a secure box for the projector to be stored in. The school already had a projector that can be stored in the room and then used.

In addition to these projects, we carried out some smaller projects that did not require money but just our time. For example, we created a ‘careers wall’ in the library – we put posters up explaining how the students can achieve common career goals, such as becoming a nurse or a doctor. In addition, we created a careers guidebook that was placed in the library. This provided lots of detailed information on all the different types of institute that the students can go into after school and how to get funding. Prior to our visit, many of the students had strong career aspirations but lacked information on how to obtain their goals.

What have I gained?

Firstly, I have had a real insight to the culture in Kenya. I have been able to witness first-hand what life is like here, especially after living with a Kenyan family for the 10 weeks. This has improved my awareness of the difference in other cultures and inspired me to do more travelling in the future.

In addition, the trip has improved my ability to manage a project. This is a skill that will hopefully benefit me in my future career. The trip has also confirmed to me, that I enjoy project management and it is something that I am good at. As a result, it has given me ideas of what career I might like to go into after university.