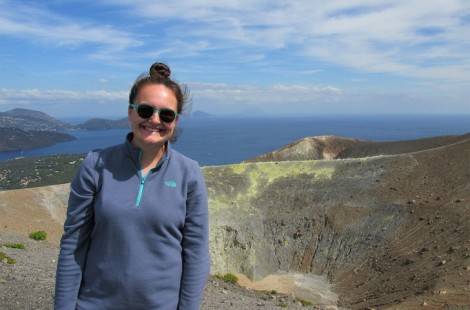 The generous contributions from Gateway and Rosemary Murray Travel Funds aided in my visit to Sicily this summer. After landing in Catania, I swiftly headed to Milazzo on the north coast to catch a hydrofoil to the Aeolian Islands. These are a group of seven small volcanic islands, all of which are designated as UNESCO world heritage sites due to their pristine environment and the insight they provide into volcanic processes.

I stayed on Vulcano for two weeks, which as its name suggests, is characterised by past and present volcanic activity. The last eruption on the island occurred from 1888-1890, but since, fumaroles (vents through which steam and gas are emitted) have persisted on the crater rim of the Fossa Cone and in Porto di Levante, the main town.

The gaseous emissions on the Fossa Cone were the primary reason for my visit. Many tourists walk up to the crater then around the rim to observe the magnificent volcano, exposing themselves to the fumarolic gases, which at high concentrations can be dangerous to health. Hence, I went to study this, forming part of my third-year dissertation. This involved 10 arduous climbs up to the crater to collect data about air quality around the crater rim and surveys from tourists about their activities at the crater and their perception of risks.

When not busy collecting data, I explored other sights of the island including the Fanghi thermal mud baths, and the Valle dei Mostri (volcanic rocks which resemble dinosaurs). I also visited another of the Aeolian Islands, Salina. This island contrasted starkly to Vulcano with lush green vegetation on the slopes of the two dormant volcanoes. I visited the main town of Santa Marina which had quaint shops and a pristine harbour and I then walked to Lingua on the south coast, which is famed for its lighthouse and anchovy fishing.

After finishing my research, I returned to mainland Sicily for a few days where I visited the town of Taormina and Mount Etna. The sheer size of Etna standing at 3350m, with over 300 craters was a spectacle in itself. Thankfully a cable car was able to assist with the ascent to the summit before I made the rest of the journey by foot to the currently active craters. When the cloud cleared, it became obvious the ominous rumbling sound was from the summit’s south east crater. This large dome, which was ejecting boulders and gas, could only be viewed from a distance due to the current height in activity, however I was also able to explore vast lava flows and other craters including ones from the 1971 and 2003 eruptions lower down on the northern and southern flanks.

This amazing experience allowed me to gain first hand insight into volcanic processes while also facilitating my research, and I would like thank Gateway for contributing towards this trip.