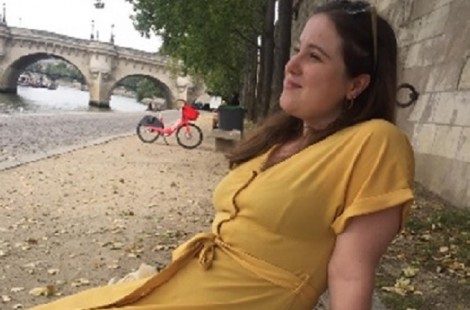 Thanks to Gateway Funding and the Rosemary Murray Travel Award, I was able to travel to Paris for the first time, and spend a week there visiting some of the city's amazing historic sites.

I travelled with a friend who had visited Paris before, staying in a hotel a little out of the city centre, but thankfully very close to line one of the metro, making it incredibly easy to travel to the sites I wished to see. On the first day, after travelling by Eurostar, we set out to visit the Louvre. After queuing for a while – giving us ample time to view the beautiful square surrounding the entrance of the Louvre – we made it inside. One of the many incredible sights that stood out for me while wandering round this massive museum, was that of the medieval foundations of the Louvre, which you could view by descending right to the basement. Seeing the foundations of the Louvre as a defensive siege castle, really put into the perspective the social and philosophical change brought in by humanist teachings, which encouraged Louis XVI to use the building, now a palace to display his collection of royal paintings and make them accessible to the public – and equally how far that legacy has come in making the Louvre the grand, world renowned museum it is today.

The near Eastern Antiquities and the Egyptian Antiquities gallery was an interesting reflection on the French Empire’s colonial legacy and indeed the colonial legacy that makes the existence of most museums possible, especially when it was viewed alongside the preserved rooms of the royal courts, situated as a gallery themselves, emphasising how collected , physical displays of humanist education, such as the classical sculptures and the sections of hieroglyphics, were used to catapult a new age of monarchical displays of power, and the more empirical force that was needed to retrieve such objects, the more prestige they brought to their owner. Being able to see the Venus de Milo, was also a highlight of the visit.

We then travelled into the centre of Paris, in which we were able to feel very Parisian by wandering down the Seine with a picnic of brie, baguette and grapes, although sadly Notre Dame is largely hidden from view due to the scaffolding surrounding it. Nonetheless we were able to explore the streets, and found the Shakespeare and Company Bookshop which was an unusual gem of literary history, given that authors like Hemmingway were among its founding donors. Down another small street, (this trip definitely honed my map reading skills) we found the Saint Chapelle, which was a breath-taking sight due to the sheer volume of stained glass and decorative painting and stonework covering every possible surface. Again it was interesting to note the transition of previously private buildings (the chapel was originally used as the king's private chapel) into a public gallery.

We spent almost every minute of our time there rushing from sight to sight, viewing the Eiffel Tower, the Hotel Invalides (and Napoleon’s tomb which was surrounded by tattered flags from his military escapades), the Pompidou centre and as many pretty parks as we could. The final destination of the trip was a morbid one – the catacombs. I have been studying a lot of medical history and have become particularly interested in how the way we process death has changed over time. The catacombs were certainly a striking example of a very different, more familiar relationship with death. The winding tunnels filled with millions of skulls and femurs arranged in hearts and crosses situated amongst poems concerning mortality served to almost remove any sense of death at all, and it was a struggle to remember that every skull had once been a person with an intricate life. It was definitely one of the most unique and unnerving experiences of my life. After that we found a nice little bar to calm out nerves, which thankfully, like a lot of bars in Paris, existed perpetually in Happy Hour.

Overall it was an amazing cultural experience, unlike anything I have done before – and I even managed to improve my very basic conversational French!