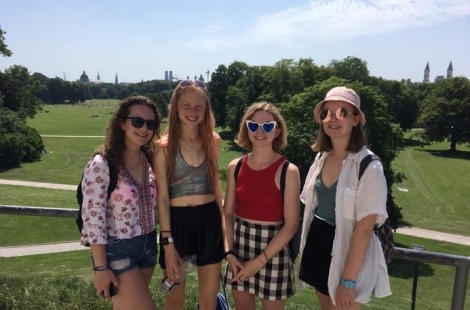 At the end of June 2019, I travelled with three friends to Munich, Germany, where we stayed for three nights. This was my first time abroad without a parent or teacher and was the first time I’d been to Germany, so was a big step for my independence as well as an opportunity to see a completely new place, broadening my cultural horizons. I also had a chance to learn some phrases in German, which I could not speak before, though my most used phrase was probably ‘sprechen sie Englisch?’. Luckily a lot of people were very friendly and spoke very good English too, so communication wasn’t too difficult.

On our first day in Munich, after we had found the apartment in which we were staying and had a rest after the early morning flight, we decided to explore the city on foot. We walked through the Alter Südfriedhof, a stunning cemetery containing the graves of many prominent figures from 18th and 19th century Munich, then along the river Isar to the Deutsches Museum, the largest science and technology museum in the world. This was especially interesting to our group as all of us study sciences of some sort. We then went to Marienplatz, the central square, where we stayed the rest of the day.

The following day was very hot so we spent most of the day in the beautiful Englischer Garten, walking along the lovely shady paths from the Chinesischer Turm (Chinese Tower) to Kleinhesseloher lake. At lunch time we sat by the river, with our feet in the water to keep cool, watching the local people go swimming. This was something noticeably different to Britain, where people see most rivers as too dirty or too dangerous to swim in, whereas this river was very clean and the people did not seem worried about being washed downstream.

On our last day before we had to travel back to the UK, we made a day trip to Neuschwanstein Castle in Swangau, south-west Bavaria, which was built in the late 1800s for King Ludwig II of Bavaria. From Munich, it was a 2 hour train journey, a half-hour bus ride and a 40 minute walk up the hill to the castle, but the view of the castle and surrounding scenery from the top was absolutely worth the effort. Once inside, we had a tour of some of the rooms, including an indoor cave, and learnt some of the history behind the behind castle and King Ludwig himself. The whole thing was extraordinary and definitely a highlight for me.

I am very grateful for the Gateway funding to give me the opportunity to go on this amazing trip. I definitely feel that it has given me confidence in my independence and organizational skills that I did not have before.