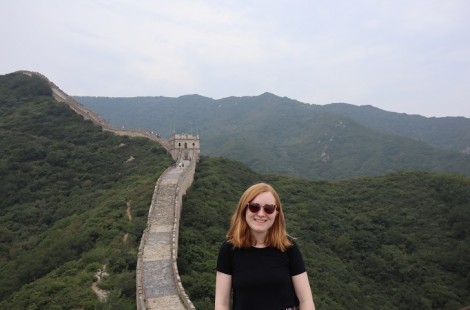 I am really grateful for the Gateway Challenges and Rosemary Murray Travel Exhibition funding that I received to teach in and travel around China for two months this summer.

Before even arriving in China I had learnt a lot through all the preparation, with a long visa process and TEFL course, but I was excited for the challenge! Once I arrived in China I got thrown straight in the deep end on a homestay with a local family who I stayed with for the first week. I tried lots of different foods, and they showed me how to do traditional Chinese writing, painting, and playing instruments. They showed me round Beijing, and we went to lots of sights such as the Summer Palace, hutongs and museums. We even went to the Beijing Opera on my first evening, which was an interesting start to China!

After my first week I said goodbye to my host family and began teaching at Summer Camps in Shijiazhuang and Beijing. I shared a room with some other teachers and ate in the canteen every day (which wasn’t always the greatest food but was an experience!). I taught English classes, focusing on fun games and creative activities to get the kids engaged with English. I had pre-prepared lessons for my TEFL course, but I had to be flexible as I had lots of different ages and abilities to teach. We also did lots of extracurricular activities like singing and dancing, and sometimes the kids became the teachers and I learnt some Mandarin. Every camp had a showcase where each class gave a performance, often involving the teachers. I really loved teaching the children and learning a lot from them as well. The language barrier was sometimes challenging, but we all tried our best. When I wasn’t on campus, we went on trips to famous sights in Beijing such as the Great Wall and the Forbidden City, and some lesser known but really interesting places in Shijiazhuang. A few of us even took the bullet train to the nearby city of Tianjin for a day which was a city I had not heard of before visiting, but really loved.

When the final camp finished, I began backpacking around China with another girl from the Summer Camp. We began by taking the train to Xi’an. It was really exciting to move on to the next phase of the trip to see some different places. Our hostel in Xi'an was right in the centre of the busiest market street in the Muslim Quarter – you stepped out into absolute craziness – it was so busy, but amazing! We spent a lot of time exploring the markets, towers, temples and wall, and saw the famous Terracotta Warriors – which were so very crowded!

After a few days in Xi’an we took a very long 20-hour sleeper train to Shanghai, which sounds awful, but was actually quite a fun experience. In Shanghai I did another homestay where I spent a few hours a day tutoring the two girls in the family, and the rest of the time I explored Shanghai. Sometimes the family took me to places such as temples, markets and shops, and other afternoons I went out to explore on my own. One evening I went up Shanghai Tower to see Shanghai from above which was awesome, and a nice break from the business on the ground. Going out on my own in such a large city is something I didn’t see myself doing before I went to China, but the trip really built up my confidence and it was really empowering.

After my homestay in Shanghai, I met up with a few other girls to travel to places near Shanghai. We went to Nanjing, a city which is less well known but I really liked. We then moved on to Suzhou and Tongli which are really beautiful, ancient water towns. After a lot of very busy cities, we then went to Huangshan Mountains. The mountains were incredibly awesome, I couldn’t believe my eyes they were so beautiful.

After a very tiring week moving every couple of days, I returned to Beijing to finish my trip. It was really great to return to where I started and reflect on how much I’d gained from the experience. I would like to say thank you again for the Gateway funding that helped me in having such an incredible summer.