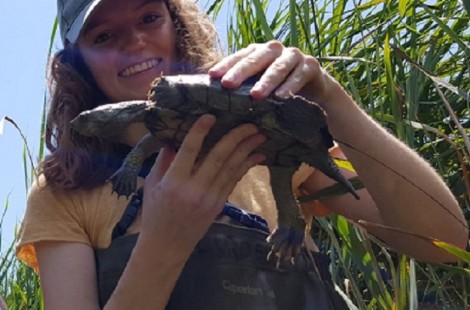 This summer, I spent two weeks volunteering just outside of the Spanish town of Valencia in their national park the Albufera.

The aim of the volunteering trip was to help with conservation both in and around the national park. The Albufera is made up of rice fields, green filters, and a central lake, all of which are monitored by a handful of workers and any volunteers they have at the time. A few of the main tasks I was set to help them during my short visit was the GPS tracking of five turtles of an endangered species, watering the plants and cutting down any invasive species, as well as removing poisonous rocks and substances from the surrounding sand dunes and beach areas.

One of the most memorable days I spent there started off with my team and another group of American volunteers removing plastic and waste from a nearby stream. Despite being in the full midday sun, we managed to work for hours and clear the whole stream of cans, clothing, bottles and any other waste that had been thrown in. The local Spanish people were so impressed and grateful for what we had done that we made the headlines of the local newspaper!

Although I applied to this volunteering trip alone, I was working with a mix of people from all over the world: Minnesota, California, and Portugal just being a few examples. I challenged myself to be as open and embracing of new opportunities as possible. This ethos lead to me sharing a bottle of Spanish wine and paella, and very engaging conversation, with a 60-year-old eccentric volunteer from Texas, as well as venturing to a little-known beach and swimming in the sea less than 100 metres away from a flock of flamingos.

As a Spanish student, I found being immersed for two weeks in Spanish culture, not only in the evenings whilst socialising and sightseeing, but also talking to the national park workers with specialist vocabulary, helped me to gain many skills in speaking conversational Spanish and gave me much needed practice, helping both with my confidence in myself and in my language ability. This trip proved a challenge for me as it was my first flight and journey alone, but it was certainly not a challenge I couldn’t overcome! I am very grateful for this funding for giving me an opportunity I wouldn’t have otherwise had.