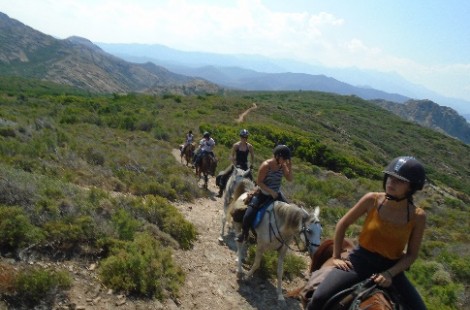 In August I spent a week in Corsica on a French horse-riding course in order to improve my French. Having studied French at the Language Centre for the last two years, this was a great opportunity to improve my conversational skills by immersing myself in French language and culture. The course was run through UCPA, which is a French organisation that provides outdoor activity courses of all kinds all over France.

This course was based at a horse farm/hotel that provided a dormitory for those on UCPA courses called La Ferme Albadu. There were eight of us on the course, and as the only English person there I spoke French all week. Before I went on the course I learnt vocabulary relating to horses and horse-riding which was extremely useful. We cared for our own horses and tack, giving me further chances to expand my vocabulary for more specific parts of the tack, care equipment and parts of the stables. On the daily treks across the Corsican countryside I used the lunch hours to talk to the other people on the course about their lives and listened to many different topics of conversation.

During the week we went on three full-day treks directly from the farm, in different directions. Corisca is very mountainous and La Ferme Albadu is in Corte, at the centre of the island, at the confluence of two valleys. On our treks we went up mountains on both valleys, giving stunning views of the landscape and some terrifying steep ascents and descents. Sometimes we followed well-used bridle trails but frequently we followed nearly non-existent paths such as goat trails, which were very narrow and often easy for the horses to slip on. At some points the trails were so steep that we had to let our horses descend alone and then follow them down!

In the evenings we would be treated to a three course meal put on by Marie-Christine, the lady who ran the hotel part of the farm. On most evenings, there would be between four and ten other guests who were staying at the farm and we would all sit at a long table in the courtyard outside, overlooking the valley, and have a long dinner between 7 and 10.30pm. This was another period of time where I would hold conversations with new people, and listen to conversations between groups of people. While my French was not up to the standard of being able to easily participate due to the speed of the conversation, over the week my ability to follow the conversation improved significantly, from being able to understand the topic of conversation but rarely the input from individuals, to being able to grasp the meaning of most sentences and opinions of the people involved in the conversation. As a result, this trip has given me confidence in my ability to pick up more French should I decide to spend time in France in the future.