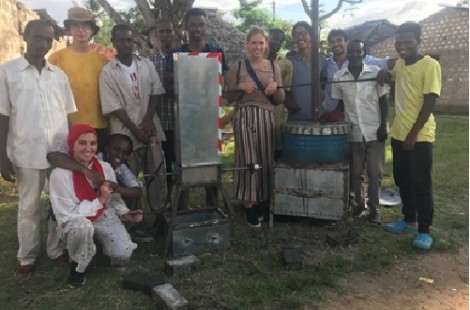 The gateway programme has opened up many opportunities for me over the past year. In particular, the funding allowed me to spend 2 weeks of my summer visiting Takaungu, a village in Kenya, where myself and 5 first year engineers got the opportunity to work on a recycling project, in association with Centre for Global Equality.

Takaungu has a growing problem with plastic populating waste along their roads, beaches and within their oceans. The aim of our project was to combat this issue by finding alternative functions for this waste plastic, while also providing the village with useful building materials. Throughout the year, two machines had been designed and tested; one which shreds the plastic into smaller parts and one furnace which melts the waste plastic, mixes it with sand and forms a molten mixture, which is then emptied into moulds. After spending many weeks in Cambridge designing, manufacturing and testing, we took our ideas, in the form of cardboard prototypes and storyboards, to the community of Takaungu. We were warmly welcomed into the community and we received very enthusiastic feedback on our ideas, giving us confidence for the upcoming weeks.

Due to the complexity of the shredder, the parts were adapted and cut in the Department of Engineering, Cambridge. The availability of resources and equipment in Kenya were limited to an angle grinder and a welding machine, which would did not have sufficient power for the shredder parts to be produced. With this in mind, we made sure to cut extra pieces and be prepared with alternative ideas which would be discussed with the community, for an achievable design. Upon arrival, we conducted an introduction meeting which entailed the plan for the weeks ahead and a discussion on viable alternative options.

A furnace had been designed by a group last year, so the main aim for our team was to focus on the efficiency of the furnace: to use less firewood or find other energy sources while making the process faster and easier. We achieved this by redesigning the furnace structure to add insulation to the combustion chamber, where the firewood is burnt. The design process and testing was completed in Cambridge and presented in Kenya using cardboard prototypes and thoroughly explained storyboards. The community were passionate to see this idea in action and eager to get started.
At the end of our venture, we successfully left two working machines in which the community saw so much potential in. Where we saw building bricks, they saw potential for a small income, a few job opportunities and a future for the community.